The Quail: A Motorsports Gathering

Thanks to the generosity of a dear friend, and the kindness of John Watts and Robyn Johnson at Acura, I had the privilege of attending the 2019 Quail Motorsports Gathering in Monterey, California in August.


I've had the privilege to attend so many signature car events over the years with great colleagues at classic locations.  The "Quail", however, was one-of-a-kind -- a car show for the "One Percent" (that is, the 1% wealthiest individuals).  It was just one event in a week-long celebration of the finest automobiles, their collectors, and the vendors and people who love them, known as "Monterey Car week". What I didn't know then, but have now learned, is that the Quail is also the signature event for announcing the release of new cars or models.


The adventure began on a Thursday evening.  I flew from San Diego to San Jose and was picked up by my friend, Bill, in his Acura NSX super-car.

I love the color of Bill's car and it is so comfortable and hi-tech! We drove the NSX out past Salinas, through the coastal agricultural beauty of Northern California, then over the coastal mountains into Monterey.

Our first stop was to attend a grand opening of the Monterey Motorsports Park -- deluxe condos for your car collection. Bill was invited to park his car out front with a few other super-cars -- a Ferrari and a Lamborghini Aventadore.

We were greeted by the organizers and treated to fine hors d'oeuvres, sparkling wine, and yummy deserts.  The gathering was populated by beautiful people, fashionably dressed in designer clothes, sharing their affection for the finest in automobiles.  Some people were owners while others were sales prospects.


The garages, er. . . . sorry, condos, are amazing.  There are about 100 units of varying dimensions to accommodate any size collection.  The buildings are tall with big roll-up doors, brightly lit, and well-equipped. 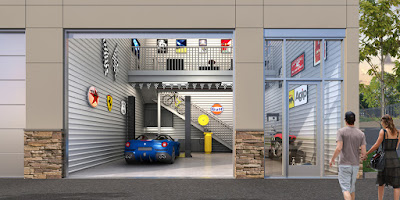 Each one comes with a built-in mezzanine that you can customize to your taste -- we saw that people had used the elevated space for kitchens, dining areas, collectible display areas, pool tables, virtually anything you would want in your man/woman cave. 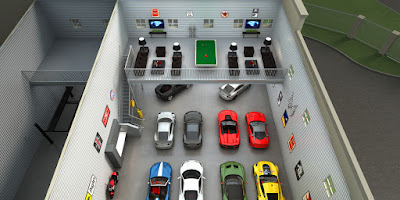 At a cost of about $350,000 per unit (on average) the whole complex exuded wealth and status. 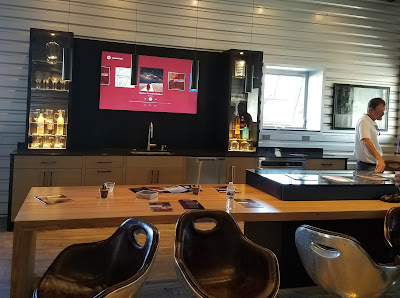 Our next stop was to drive to the private Carmel Valley Ranch Golf Club for an Acura reception. The Acura event included more great food and beverages, designer fashions, and, this time, live entertainment.  On display was the Acura Type S Concept car -- it was a brilliant blue, sleek, and reminiscent of the Tesla Model S, but "tighter" in size and shape.  I liked it! 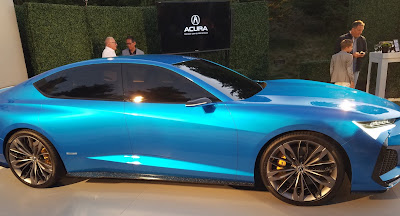 Having had our fill of two cocktail parties, it was time to drive the NSX back to San Jose for a good night's sleep and to prepare for the coming day at the "Quail".


Friday morning we made the return trip to Monterey.  This time Bill was able to demonstrate the performance of the NSX as we navigated the Laurales Grade that connects Highway 68 with Carmel Valley.  If you haven't driven this road you need to experience it (Nan got to drive it a few weeks later in the 2003 Corvette on our way to visit a winery in Monterey). Even though we got an early start, the roads leading into Monterey from Salinas were jammed with car enthusiasts that morning.


As we arrived at our designated parking lot the first thing we saw was a "LaFerrari".  Not just any old ordinary Ferrari, the "LaFerrari", the last Ferrari model with a mid-engine 12-cylinder power plant while also being the first mild hybrid Ferrari.  Its combined output is 950 horsepower. They only made 499 units, each costing a minimum of $1 million. Due to my recent fetish for yellow cars, I found this one to be especially nice! 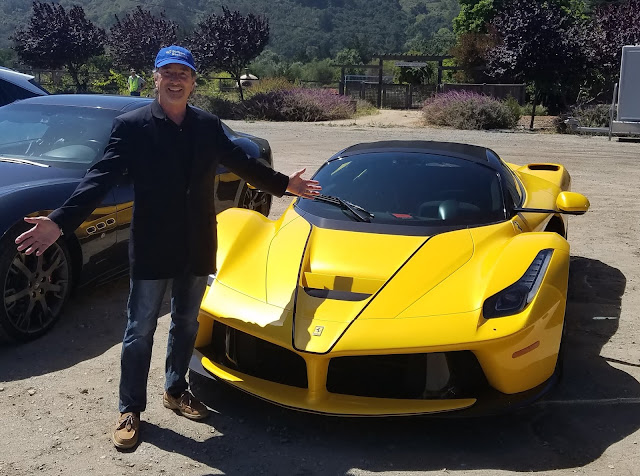 I think I could get accustomed to driving this car, even thought it isn't a Corvette.

We walked about a half-mile to the Quail event.  The grounds of this private golf course were stunning making it hard for me to believe that they would permit cars to park on the manicured lawns -- but they did!  After getting past Security with our VIP passes, the first thing we saw was an immense line of classic cars celebrating the 100th Anniversary of Bentley Motorcars.

Bentleys are cool, but I wanted to see all the super-cars.  Here is the lineup as best I can remember it, in alphabetical order:


I loved riding in Bill's NSX and was impressed with its performance, especially the off-the-line acceleration afforded by the combination of electric motors and gasoline engine.  But my favorite example was the "Indy Yellow" version that we saw at the Acura display.  Did you know I have a fondness for yellow sports cars?  The MSRP for an Acura NSX is about $157,500.

Acura NSX - Yellow is Back!


Aston Martin brought their DBS Superleggera to Quail, their ultimate production sports car.  It comes with a 5.2 liter V-12 twin turbo engine putting out 715 HP. The price tag for the coupe is about $305,000. 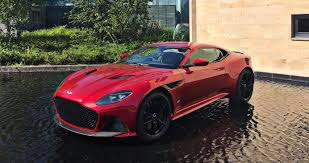 
The BMW folks displayed their i8 sports car, which has the amazing beauty of a true super-car. Unfortunately, it doesn't have the "guts" to keep up with the competition -- which, to me,  is sad. The MSRP is about $147,500 -- at the low end of the Quail scale. 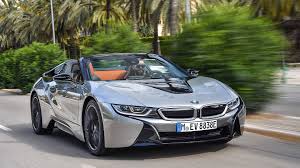 Car and Driver says, "If you are lucky enough to see a BMW i8 rolling down the street, you'll immediately take notice. Unfortunately, the i8's plug-in-hybrid powertrain can't cash the checks written by its supercar design. With 369 horsepower and an estimated 18 miles of all-electric range, the i8 can't keep up with either the best sports cars or the best plug-in hybrids on the market. But for drivers who value curb appeal and exclusivity above all else, none of that may matter."


Million dollar cars are nothing new for Bugatti, and they keep outdoing themselves with more powerful and more expensive cars.  They chose the Quail event to unveil their latest super-car.  The Bugatti Centodieci will cost $9 million and only 10 cars will be made.  I decided that I didn't need to buy one because all 10 had already been sold and I probably couldn't get it in yellow! 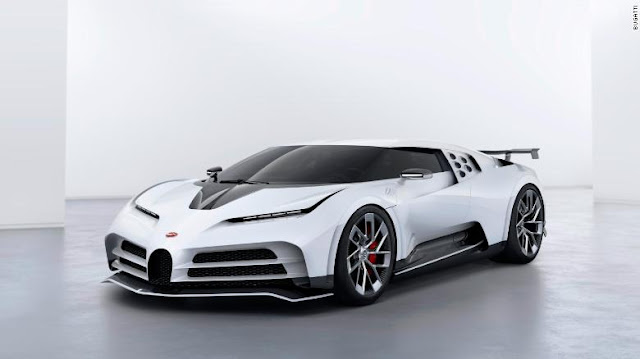 
I never heard of a Drako, maybe you haven't either, but that's probably because is is a startup company.


Like Bugatti, the Drako folks used the Quail event to unveil their striking new car. It is a limited production, electric, four-passenger, super-car with 1,200 horsepower and has a top speed of 206 MPH. The cost is estimated to be $1,250,000. 
When you think of cars made in Sweden, if only Volvo and Saab cone to mind, the Koenigsegg Jesko will give you a new appreciation for Swedish engineering.  Like many of the other super-cars at this event, it simply looked wicked.  Similar to the SSC Tuatara (see below), it sports a twin-turbo 5 liter engine delivering 1,600 HP on E85 bio-fuel (1,280 HP on premium gasoline), a carbon fiber frame, a 9 speed transmission and active rear-wheel steering. 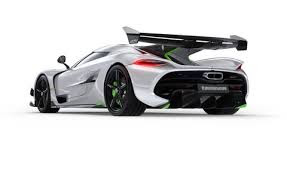 
Bill and I got an up-close look at the Lexus LFA, the Lexus of super-cars.  Earlier I had been impressed with the LC 500.  The LFA was 10 years in the making and was limited to 500 units.  It is powered by a V-10 engine mated to an automated sequential gearbox.  Lexus claims that they have broken the lap record at Nürburgring for a production car on noncompetition tires.  Drivers could choose everything, from the leather stitching to the color of the brake calipers.  The base prices was $375,000 and it is rumored that seven cars are still in Lexus dealer inventories. 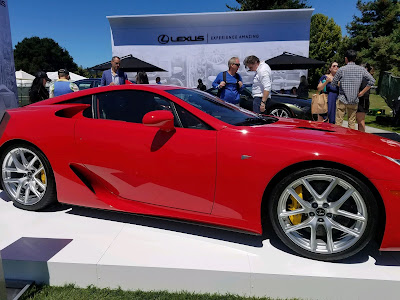 
While I found the Pagani Huayra very interesting (especially its brilliant blue carbon fiber body), the website is useless (in my humble opinion).  So I've pasted below two links -- and you might find the Car and Driver review more enlightening than the flashy web artistry.  The Huayra roadster offers a 720 HP twin-turbo V8 (sourced from Mercedes) at prices starting about $2 million. 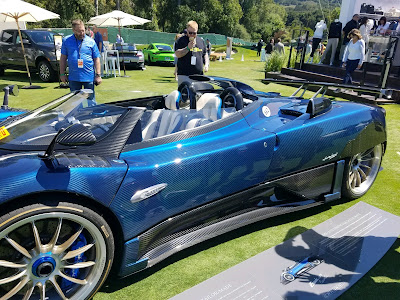 
Bill and I were really impressed with the Rimac C_TWO, an all-electric super-car manufactured in Croatia (and when I visit Croatia in 2021 I'm going to try to visit the factory); the factory is just 200 KM from the birthplace of Nikola Tesla.  Unlike the other manufacturers, the Rimac representative, Sasha, let us sit in the car and play with all its gadgets.  Sasha answered all our questions about battery technology and their consulting business to other manufacturers and even gave Bill a Rimac baseball cap! 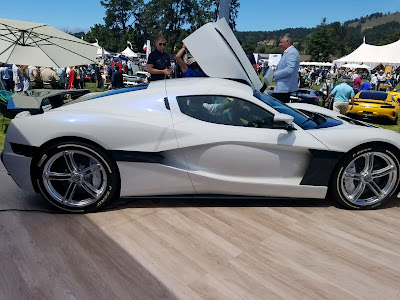 
Last (alphabetically), but certainly not least, on the super-car list was the Tuatara.  Bill and I met one of the company's executives who was demonstrating not only a completed model (which was going to be delivered to the first owner at this event), but also a "cut-away" model showing its engine, frame, and components.  I was intrigued that the car is being manufactured in Eastern Washington and on our next trip to Walla-Walla I plan to get a factory tour! 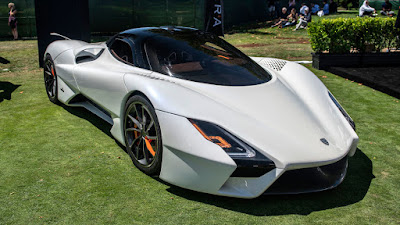 There were too many super-cars for me to report on in a comprehensive way.  I have intentionally omitted Audi, Lamborghini, Maserati, McLaren, Porsche, Saleen, and others.

So you will ask, "Cary, what impressed you the most at The Quail?"

The answer isn't a car -- it's an airplane!  Watch for a future post on the ICON A5.