Corvette Racing started the 2013 ALMS season the way they finished the 2012 season with a 1st place victory at Sebring Florida.  It was a thrilling victory as the #4 Corvette came from second place in the final 25 minutes to pass the #62 Ferrari and win the 12 hour race going away.  The driving team of Gavin, Milner and Westbrook pitted three more times than the Ferrari but were able to bring home the victory.  The 12 hour race covered 333 laps.

The finishers in succession were Corvette (of course!), Ferrari, Porsche, BMW (this year running the Z4 GTE), Viper, BMW and then two Aston Martins.  The #3 Corvette only completed 213 laps.  The Viper led the race for many laps in the middle of the race -- look to them to be more competitive this year than last year.

The next race is April 20th right here in Long Beach.  Who wants to go?! 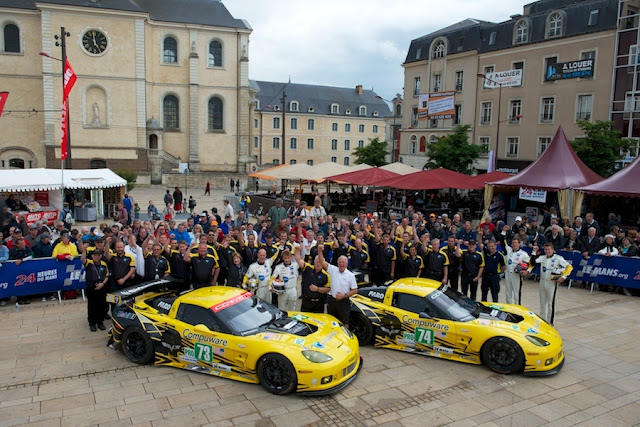 Here are some excerpts from the Autoweek Article

In GT, Oliver Gavin, Tommy Milner and Westbrook won in the No. 4 Corvette C6 ZR1 by 2.7 seconds. Matteo Malucelli, Olivier Beretta and Gianmaria Bruni led much of the race in the No. 62 Risi Competizione Ferrari 458 Italia. Milner took the lead with 14 minutes remaining when Malucelli had an off-course venture in turn 10, highlighting a charge back into contention after the team lost a lap due to electrical problems four hours into the race.
Indeed, the GT class provided the best action of the 61st running of the 12 Hours of Sebring. The winning Corvette C6.R was the fastest car in the class, but it twice had to fight back from a lap down to secure the victory.
A short circuit knocked out the dashboard and the rear lights -- and cost the car nearly two laps in the middle of the race before it returned to the front, only for Westbrook to receive that dubious penalty after contact with the Ferrari. Westbrook claimed the Ferrari was being shown blue flags to move over, and that its driver, Bill Sweedler, waved him by -- only to turn-in on him when he tried to dive down the inside. The collision sent the Ferrari into a spin, and Sweedler not long after suffered what appeared to be a mechanical failure in its right-rear suspension or tire area that resulted in a heavy crash that eliminated it from the race.
Milner took over the car for the run to the flag with what looked like an irretrievable deficit to Risi's Ferrari shared by Beretta, Malucelli and Bruni.
Bruni looked as though he would be able to maintain a gap to the Chevrolet, but a back problem meant Risi was forced to replace him with Sebring debutant Malucelli for the final stint. The Italian lost time in traffic early on and finally relinquished the lead when he went off in the closing stages.

At the news stands now!  Motor Trend has published a complete magazine devoted to the CORVETTE!

The special edition of Motor Trend has 60 years of Corvette news, plenty of history, reprints of old Motor Trend articles (my favorite is the announcement of the Stingray in 1963), and a review of the C7.

I bought a copy while waiting for a flight home and read the magazine cover-to-cover on the flight home.

Get yours today!
Posted by Cary at 8:29 PM No comments: