You may recall the story about the Go Kart that Nancy gave me for my birthday last year:


I soon realized that the red 1962 Fox Kart, built by Randy Gryczkowski, and sold to me by Tracy Schooler, was too beautiful to drive.  Randy and I have become friends and he is helping me build a blue 1961 Fox Go-Boy that will be a driver.  Recently Randy informed me that the 62 Fox was given a nickname when it was being restored -- "Sparkle". 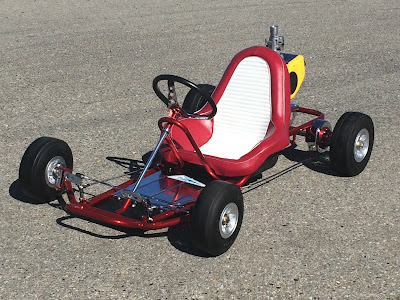 In the past year I joined the Vintage Karting Association and have met a group of nice, helpful, enthusiastic Karters.  They are not only helping me restore the 61 Fox (which has been nicknamed "Shine"), but also are encouraging me to participate in some of the karting events held all across the country.  Last weekend a VKA event was held in Bakersfield, California.  Nancy and I took Sparkle to be judged; we also wanted to learn more about what would be needed to race Shine.

When we arrived at the Bakersfield Kart Track on Friday we didn't know a soul.  Soon we were greeted by three of the event organizers, Joe Swantek, his brother, Richard, and Richard's wife Theresa.  They showed us around and introduced us to other Karters.  Two amazingly friendly and helpful guys were Louie Figone and Tom Corso.  Residents of Half Moon Bay, California, they have been friends for many years and brought a trailer full of vintage Karts.  Nancy and I watched them racing against each other with enthusiasm!  Thursday and Friday were reserved for practice and tuning; Saturday would be Race Day and Judging of Karts.  After getting the scoop on the schedule for Saturday, we went to our hotel room to watch some college football. 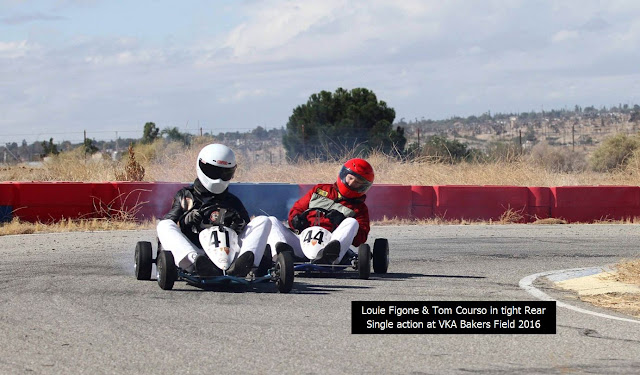 Saturday morning we returned to the track to find a familiar face, Jack Murray, a fellow San Diegan, and a serious Kart collector.  Jack has been helping me find all the parts I need for Shine.  Jack showed us his unrestored Kart that would be judged, and gave us some pointers as we prepared Sparkle for the inspection. 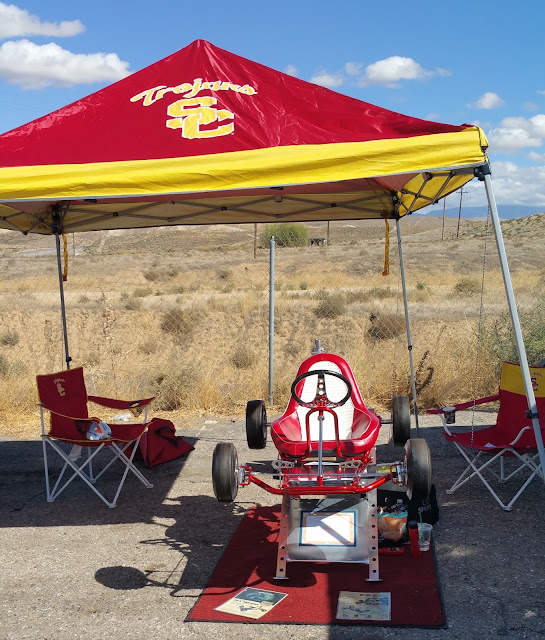 Nancy and I camped under our USC pop-up, polished the Kart, and listened to the Trojan game. 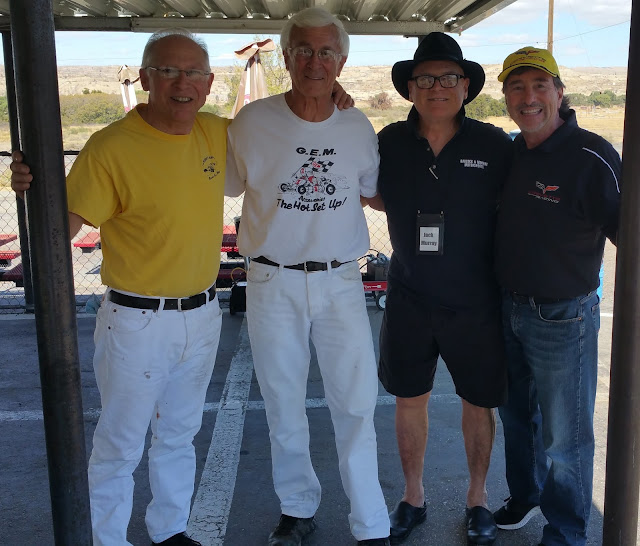 Getting ready for the Races to begin, I visited with (from left to right) Tom, Louie, and Jack.  They ran two heats with four or five different classes.  These guys are so competitive.  And so fast!  They reminded me of the GTLM racers.

Between heats, the VKA organizers treated everyone to lunch!  Amazing!  Theresa came to the track with sandwiches, cookies, and drinks.  I love the VKA hospitality. 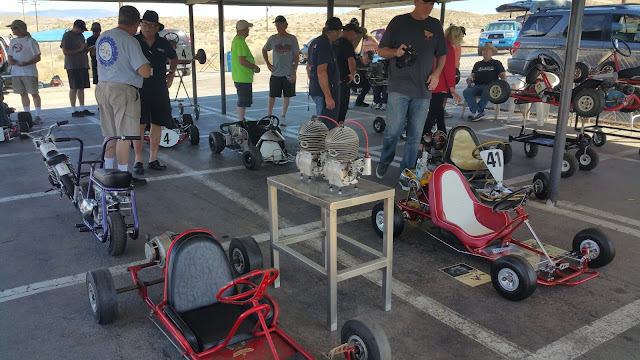 When the races were completed it was time for the Kart Show/Judging.  Everyone  was welcome to have their Kart (or minibike) judged in one of six categories.  The entries were assembled and inspected by the three judges. 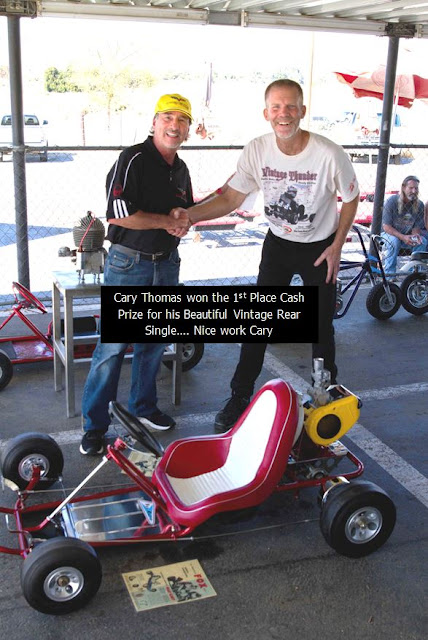 I was crazy happy that Sparkle won 1st in its class.  Of course, all the credit goes to Randy and Nancy!  Jack's unrestored Kart won in its class too.  A good day for San Diego Karters.

At this point I thought that the excitement was over for the weekend.  But I was wrong!  Louie and Tom graciously offered me the chance to take a few laps around the track in Louie's Dart Kart.  I had not driven a vintage kart in about 50 years, and man, it felt so good to be back on the track. 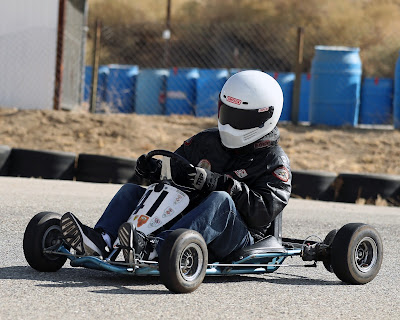 (Above photo courtesy of Jerry Imboden)
Leaving the Pits

All I can say is thank you Nancy, Randy, Tracy, Jack, Joe, Richard, Theresa, Louie, and Tom for a really fantastic weekend!

The next event will be in February, 2017 in Riverside, California.  I'm hoping to take Sparkle and Shine!

2015 was a very disappointing season in IMSA racing for team Corvette.  Porsche came on the scene with two new factory supported cars and ended the year in 1st place, followed by BMW.  In the debut of the new Corvette C7.R the #3 Corvette finished third and the #4 Corvette a distant eighth place.  It was not a happy year for Corvette fans.

Corvette Racing turned it around in 2016 starting the season with the thrilling 24 Hours of Daytona 1-2 finish and never trailed in championship points the full season.

In yesterday's final race of the season at Road America, a 10 hour event, the #4 Corvette driven by Tommy Milner, Oliver Gavin, and guest driver for the endurance race, Marcel Fassler, finished third to capture the Manufacturer Championship for Chevrolet, the Team Championship, and the Driver Championship.  The team only had to finish 7th or better to win the triple crown, calling for a cautious approach in the final race.  Showing their competitive spirit, the team was on the same lap as the first and second place cars, just seconds behind the leading Ferrari after 10 hours.  The #3 Corvette, driven by Jan Magnussen, Antonio Gracia, and guest driver, Mike Rockenfeller finished in fourth place, one lap behind the podium finishers. 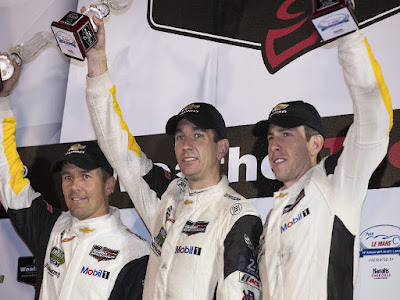 
In the preseason, with the introduction of the Ford GT40, the automotive press was billing 2016 as the year of "Chevy VS Ford" a reprise of the muscle car era.  At the beginning of the season Ford (blue) was consistently running last and the battle was between Porsche (green), the 2015 Champions, and Corvette (yellow).  In the fourth race, Laguna Seca, the Ford boys got the bugs worked out and finished 1st three races in-a-row (aided, of course, by the "Balance of Performance" handicaps imposed on Corvette and Porsche).  Corvette then finished 1st the next three races and 2nd to Porsche at COTA to virtually close out the season with one race remaining.  Of the 11 races, Corvette finished 1st five times, Ford 3 times, Porsche twice and Ferrari (red) finally won on the final race of the year.  BMW (black), who just a few years ago was the team to beat, never was a factor in 2016.

There are a few untold stories:

Congratulations to Corvette Racing, the drivers, the pit crews, and Chevrolet for a fantastic season!