Through the Beltsville Shell book I have reconnected with dozens of old friends.  An unanticipated benefit has been finding many new friends along the way.  At the top if the list is Bill Goodwin.

Bill works in the telecommunications business and is a “technology guy”.  He is friends with a guy named Al Becke, who was a colleague of Johnny Bradley years ago.  Al’s stories about a bunch of crazy car guys from Beltsville led Bill to do some internet research, and sure enough Bill stumbled across the Beltsville Shell web site.  Next thing you know I get an email from a complete stranger who grew up in Montgomery County, was about the same age as the BSYAWYD guys, had buddies with similar cars, drag raced at the same tracks we did, knew everything about the Mighty Mo, and had an equal number of stories about wild and crazy gear-heads.  Bill announced he wanted to meet up with us at one of our reunions.

I have a slight fear of stalkers, so I decided to send Nace on a reconnaissance mission.  Nace agreed to take on the mission as long as beer was part of the agenda.    So Bill and Nace met at a neutral site, (Red, Hot & Blue) consumed a few beers, exchanged stories and had a good time.  Nace’s report came back positive:  we needed to invite this guy into the “club”.  This decision was one of Nace’s all-time best.

Bill got his hands on a few copies of Beltsville Shell and began spreading the word about the Boys from Beltsville.  Bill attended his first BSYAWYD reunion in 2005. Bill must have a hundred drag racing buddies and before long our circles of friends became intertwined.  But the best connection Bill made for us was to Sonny Kruhm, the owner of “Monster Racing”, the NASCAR racing experience company at Dover Speedway (MONSTER RACING).  Bill landed a 4-pack of “day on the race track” tickets for us.  In July 2006 Bill, Sonny Boteler, Nace and I rented a Hemi station wagon, drove to Delaware, and conquered “The Monster Mile”.  Sonny Kruhm treated us to a great driving experience, photos, videos, and a million laughs. 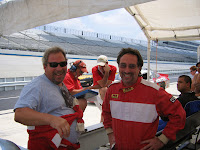 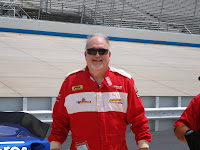 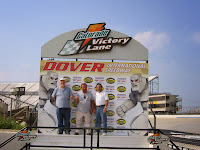 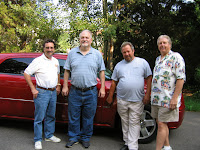 The day at Dover triggered a wickedly evil thought in Bill’s mischievous mind.  He negotiated the purchase of a real-life NASCAR (retired) race car with spare parts, towed it back to Maryland, somehow registered the thing with some unsuspecting (naïve) DMV clerk and started driving the car on the street!  Notice that the car has headlight decals -- and doesn't have headlights! OK, no one at the Mighty Mo ever drove a real NASCAR racer on the street; I’m nominating Bill for the Nobel Prize in Automotive Excess. 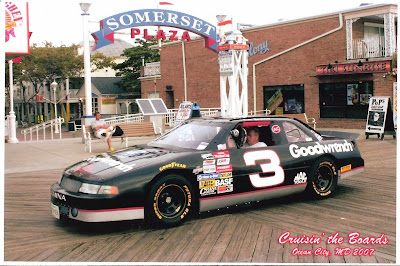 As crazy as the NASCAR street-machine idea was, it is not my favorite.  My all-time favorite Billy-Mobile was the AM General FJ8C United States Postal Service Delivery truck with the 9” rear, slicks, mag wheels, Chevy V-8, straight pipes and 700-R4 transmission.  Billie went to Walmart and bought about 30 cans of white spray paint and painted the truck in his garage!  Love the ingenuity.  I got to ride in the “Mail Truck” to 75-80 Drag strip.  When Bill pulled into the pits everyone stopped what they were doing, pointed at us, and said, “What the hell is that?” 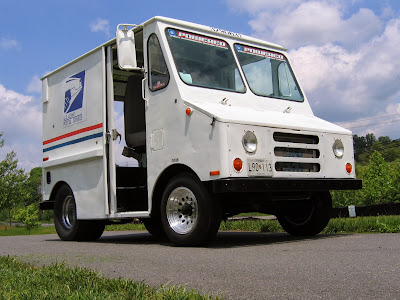 Bill is also the guy who introduced me to the annual Los Angeles Roadster Show in Pomona each January.  We have gone together a few times, but the best trip was the time Bill appropriated some bogus Press Passes and snuck us into the show two hours before the poor slobs waiting outside could come in.  We had the run of the place and had a blast visiting with the owners (who thought we were going to get them in the magazines!).  It is a good thing that Bill lives in Delaware and I live in San Diego or the two of us could get in some serious trouble together!

Happy Birthday Billie, from all your friends at Beltsville Shell!
Posted by Cary at 3:23 PM 4 comments:


It is amazing to me that people post complete junk for sale on Craig’s List.  Especially if you search with the word “Corvette”.  Used spark plugs, rusted out battery boxes, and lots of completely useless crap.

But I know someone who struck GOLD on Craig’s List:  My buddy Bob Rabourne (or perhaps his son, Phil)!

Phil Rabourne knows cars, especially through his many years as Operations Director of the Speed Equipment Manufacturer’s Association (SEMA) shows in Las Vega$.  A bit over a year ago he was on the hunt for a nice mid-year Corvette for his Dad.  They found an advertisement for a 1964 Corvette Coupe in Craig’s List in Orange County.  They made an appointment to see the car, owned by a woman who couldn’t keep it in her garage any longer.  Bob and Phil called in a car restoration friend, John Cappellitti the former Hiesman trophy winner, who  inspected it and said, “Buy it; if you don’t I will!”  The asking price was completely reasonable, so Phil offered full price. 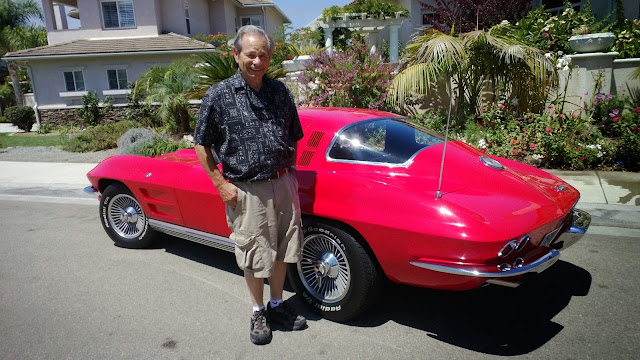 Bob is now the proud owner of a  1964 Sting Ray coupe   327 -365 HP,  4 speed, #s matching.  PS, PB, after market Knock offs, Riverside Red, Black interior.  The car underwent a partial restoration about 6,000 miles ago, but only the parts needing restoring were touched – and thing that could be left original was freshened up or left alone.  The car has a rebuilt engine, gauges, seats, and carpet kit.  The Corvette was repainted the original  Riverside Red. The door panels, dash etc. are all original.  While the car sports a 67 style hood and an updated carburetor, Bob has the original hood and carburetor in boxes in his garage.  The speedometer is showing 100,500 miles.  Bob is the third owner; he drives it about 125 miles per month,  Runs as new. Shows as a nice daily driver.

The Corvette was presented to Bob on his 71 st Birthday as a present from his Son Phil.  If you get a kick out of coincidental numbers:  the 64 Sting Ray is the 64th vehicle Bob has owned and 1964 was the year Bob was married to his wife, Evelyn!

Some progress on the 1967 Corvette

I finally got enough hours of quality garage time to accomplish a few things on the 1967 Corvette Stingray.

Nice to see that all the lights are working perfectly! 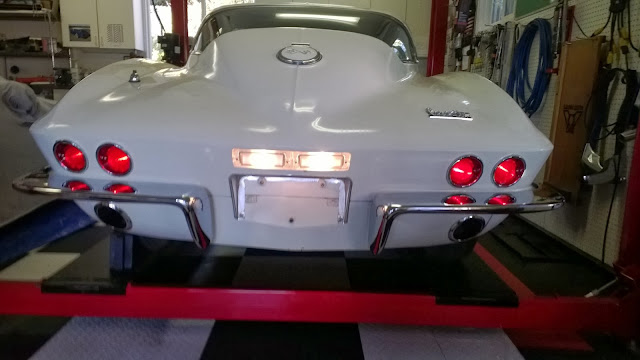