Our monthly tradition of Crusin' to an In-N-Out Burger joint continued in April.  This time we took over the store in Oceanside, at the I-5 Freeway and Coast Highway.  It is a good venue with lots of space for parking and easy access off the freeway.

Mike and Barbara Reeves always bring an interesting car; this time it was the 1934 Ford two-door sedan. 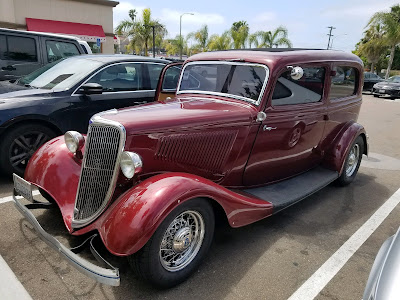 They drive this car all across the Country. 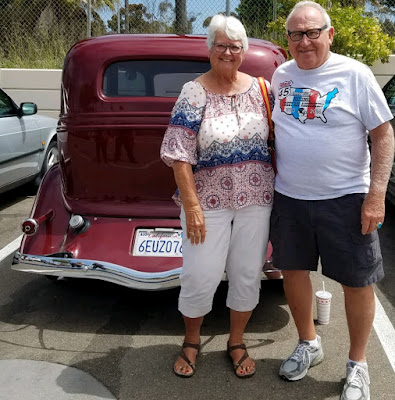 I got to wear my fancy new In-N-Out 70th Anniversary shirt. 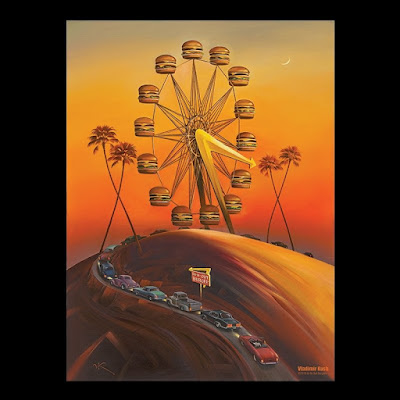 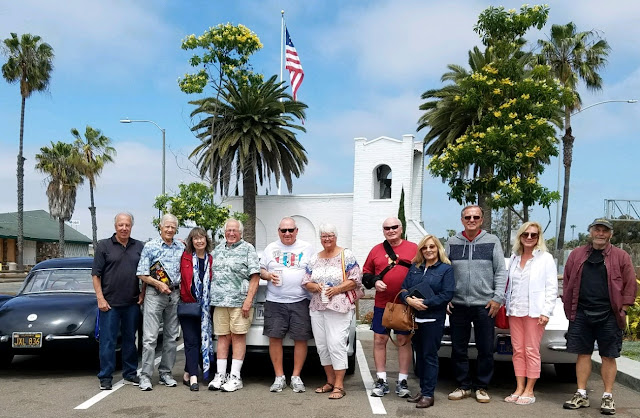 Next month we will travel south on the 5 Freeway to Encinitas.  We hope to see you there!

In the tradition of Beltsville Shell, I enjoy helping my buddies with their car (and similar) projects.  Here are three recent examples.

[In each case, my buddy is either an MD or a PhD, so I guess it has been "Doctor Month at Beltsville Shell West!]


John (Emeritus Professor, Scripps Research) and I have done a few projects on his beautiful white 1961 Corvette.  The most challenging one was replacing the front drum brakes with disc brakes.  Lately we have been fussing with the engine to diagnose its tendency to sometimes overheat (or seem to overheat?) and to generally get it to start easier and run better.  John bought a very nice electronic distributor and a matching coil. 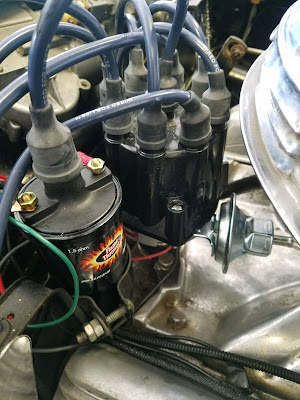 The new parts dropped right in to John's small block Corvette engine and it started right up. 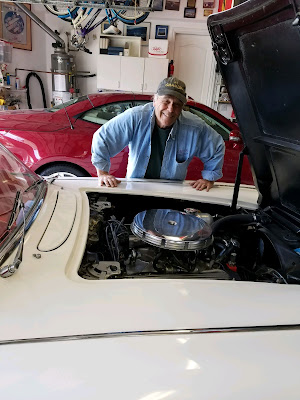 It now seems to start easier, and hopefully will run better (and cooler!). 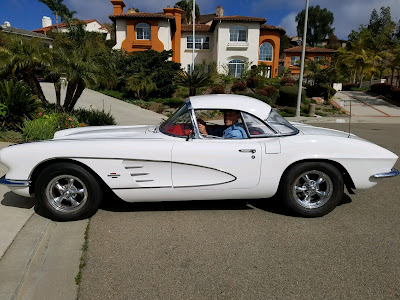 
Mark (MD at Tri-City Medical Center, Specialty: Pulmonary) owns the 1968 Corvette that was once his childhood friend's car (Mark acquired the car after his friend's passing).  Mark has been slowly restoring the car for a few years now, including repairing the rear-end and installing a new crate motor.

The body of the Corvette is in amazingly good shape for a 50+ year old "survivor", with the exception of a "tear" that impacted the leading and trailing edges of the right rear wheel well.  Here are the "before pictures:

The leading edge was gouged all the way through the fiberglass. 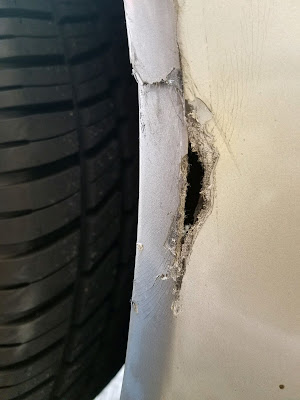 And the trailing edge was cracked. 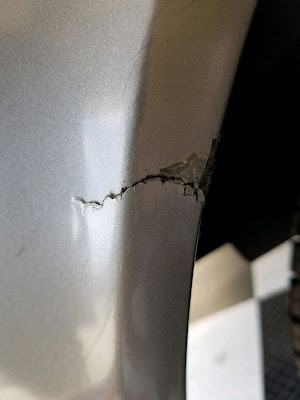 Our solution involved two steps: First we fashioned carbon-fiber "bandages" to seal the inner fender wells.  We let them cure for a few weeks.  When Mark returned, we then filled and sanded the repaired areas.  Mark was a quick study and mastered the glass work quickly!  Here is the finished repair job! 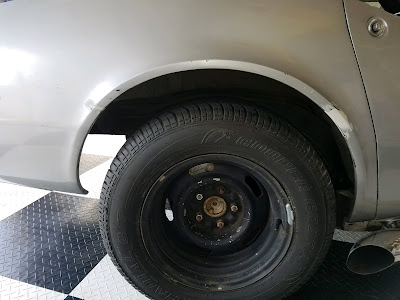 All ready for primer and paint! 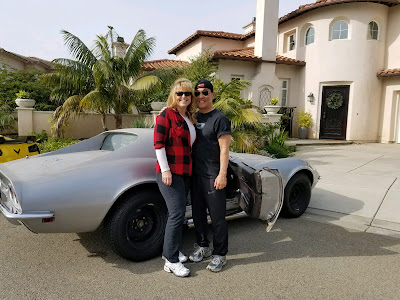 
Tom is a Neuroscientist at the Salk Institute. Although Tom doesn't own a Corvette, his machinist skills, and knowledge of racing, put him in a special class of his own.  Tom designed and constructed in his garage over the past 18 years an amazing, computer-controlled telescope.  Every part is a gleaming metal masterpiece meticulously machined from aluminum, stainless steel, or other exotic materials.  The only part that isn't super-cool is the actual telescope tube that holds the optics and mirror, since it is a cardboard "Sonotube".


For a few years Tom and I have been plotting a project to replace the cardboard tube with one made of carbon fiber.  Our initial project was to make a prototype and then apply what we learned to the actual finished product.

Our prototype is a 12" diameter carbon fiber tube (same diameter as the telescope), approximately 4" long.  Tom fashioned a spool that would be used as our mold. 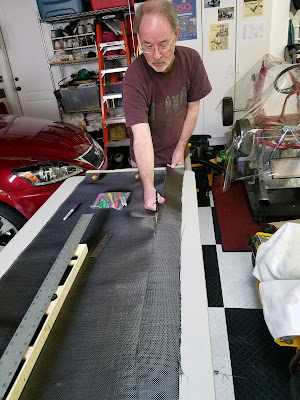 Next we smeared mold release all over the spool, then wrapped the carbon fiber sheets onto the spool/mold using West resin/hardener and a fine paint brush to smooth out the 12 layers. The fabric is 0.010" and we hoped to get a final wall thickness of about 0.125" but we ended up with 0.150" wall thickness so we learned that the epoxy adds about 0.0025" to each layer.  So now we know that 10 layers would give us a perfect 0.125" for our final production run.  We also learned that 1 squirt of resin/hardener is enough for a single 4" wide layer on a 12" OD tube.  (Tom is very precise about such things!) 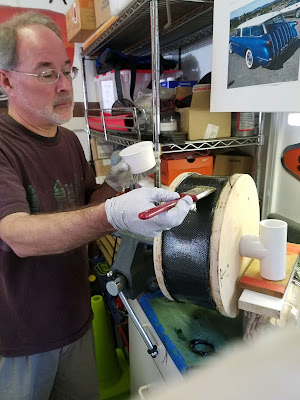 Once the prototype had cured, Tom popped the part out of the spool/mold. 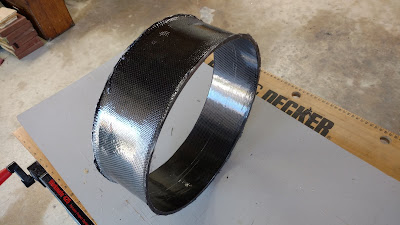 After trimming the edges, Tom had a perfect example of what the "real" telescope tube will be like. 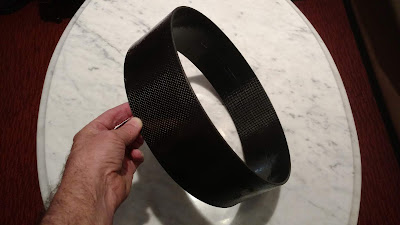 Any fears that we had about the strength of the carbon fiber tube were soon dispelled.  Here is Tom standing on the finished part, seeing only a slight deflection while supporting Tom's full weight! 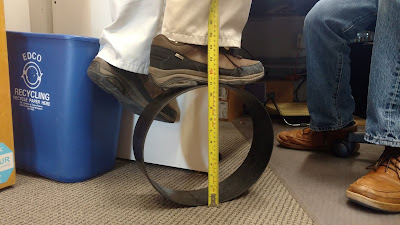 We think we have the foundation for fabricating a worthy telescope tube.  More on that project in a future Blog post!


I'm looking forward to more fun projects in the garage.  I'm so grateful that my friends don't charge me to help them!