I am overjoyed to report that the magazine of the National Corvette Museum, "America's Sports Car" will feature an article called "Corvette Memories" that will highlight the stories of a few selected Corvette owners.  My favorite article is about my buddy, Bill Hatch!  I have pasted the story and photograph below. 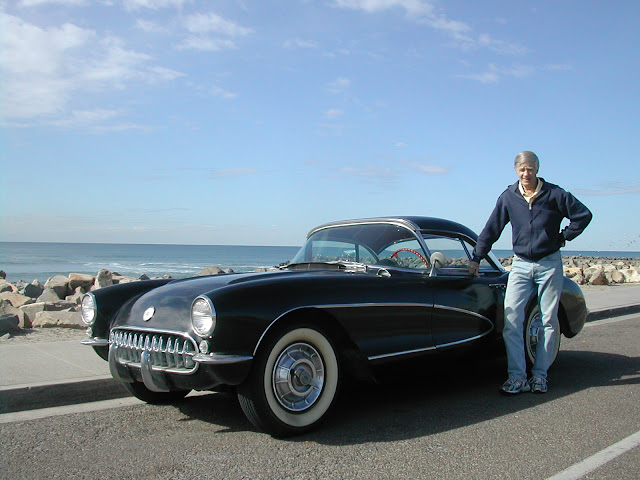 Bill Hatch bought his 1957 Corvette brand new and has been driving it ever since. The Corvette was his daily driver, taking him to work at Monrovia High School in California where he taught English and served as a basketball coach. On evenings and weekends the car took him to the beach for volleyball games and fun with friends. It took him on his first date with a girl named Marylyn, and in 1962, the car took them on their honeymoon. The Corvette was there when they had their two daughters, and now his granddaughters are taking turns riding in Grandpa’s Corvette. The car was $3,400 new, and back then gas was only 29.9 cents per gallon but you can’t put a price on the great memories Bill and Marylyn enjoyed ever since. —Cary Thomas
Posted by Cary at 8:50 PM 1 comment: