Time to check off another Bucket-List item:  Bonneville.

Two years ago, when Don and I first met Lou and Thomas, they encouraged us to meet them in Bonneville in August for “Speed Week”.  We decided about 9 months ago (you need to plan to go to Bonneville way in advance), “Sure, let’s do it!”  Little did we know that we would witness a historical record being broken!

We left on Friday, August 12th making the 668 mile drive in about 9 hours (Yes, our average speed was > the posted speed limit – but it’s SPEED WEEK, right?).  The drive to Las Vegas was familiar to us, since we had just gone that way to the Ron Fellows Corvette Driving School in April.  We never turned the radio on, preferring to talk about cars, the adventure ahead, and our many car buddies.  Our chatter was interrupted from time-to-time by the chirping of Don’s radar detector.  Proceeding on to Wendover, Utah took us through hundreds of miles of open desert and mountains.  We chose to head north on State Road 93, driving the full length of the eastern Nevada border, and were surprised at how green the fields and hills were.  We arrived at The Red Garter Hotel and Casino in time for dinner and a shower.

Lou and Thomas picked us up early on Saturday morning equipped with pit pass credentials, parking passes, and special limited edition sun-shielding hats.  We were styling.  Lou has been coming to Bonneville since 1950, and as a racer since 1953.  Thomas started going to Bonneville with Lou in 2011.   They positioned us at the starting line where we secured a spot with our USC pop-up tent, chairs, and cooler filled with ice, sandwiches, water, and beer (provided by Nancy).  Our location became known as “The Bingham Suite” in the coming days.  Everyone knows Lou, so an endless stream of visitors stopped by each day for a visit.  Don and I watched in amazement.  This was the perfect place to watch the attempts to break the records of each of the many classes.  We were less than 10 feet from the cars.  You can’t do that at Indy or Le Mans!  I found myself repeating, “They just want to go fast!”

The Bonneville “track” is actually a nomadically defined area of the Bonneville Salt Flats that is chosen by the Southern California Timing Association (SCTA) based on the salt conditions each year.  The condition of the salt has deteriorated so much over the years that a non-profit organization, Save the Salt, has been established to lobby for restoration of the salt to its once great glory.  Speed Week was cancelled in 2014 and 2015 due to rains, so Don and I were overjoyed to hear that conditions were good for the 2016 season.  There are no grandstands, no permanent buildings, or other facilities.  The entire creation of the courses (there are three courses:  Long – about 8 miles; Short – about 5 miles; and Rookie – about 3 miles where people get their license to race) and everything needed to conduct the time trials are performed by a 100% volunteer organization.   The spirit of camaraderie and support is everywhere, down to the phenomenon of people lending each other tools or parts when needed.  The vastness that Don and I saw while driving State Road 93 was nothing compared to the vastness of the Salt Flats!

As far as the eye could see there were only white salt, blue skies, and distant mountains.  Sunglasses and protective clothing are essential.  When looking down the long course, it was impossible to see from the starting line to the end  of the course due to the distance and the curvature of the Earth.  When the monster engines weren’t running, the salt flats were so quiet.

Thomas and Lou instructed us on the finer points of the cars.  We learned that “lakesters” were cars with the wheels exposed while “streamliners” had sleek bodies that enclosed the wheels. 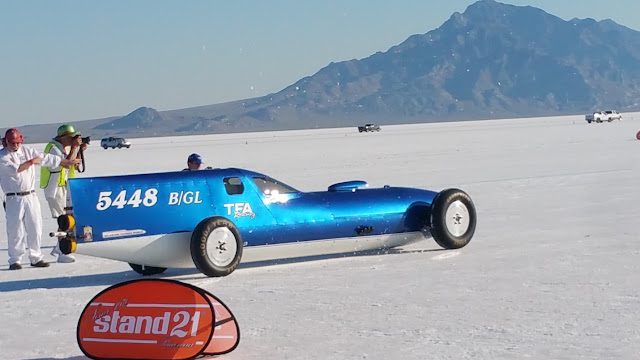 On the above car “B/GL” means “B” class engine size, running on “G” gas (rather than “F” fuel – typically nitromethane), and “L” Lakester. The above photo is the Ferguson Streamliner.

Lou favored the roadsters that were popular when he was racing, and we learned to appreciate them as well. 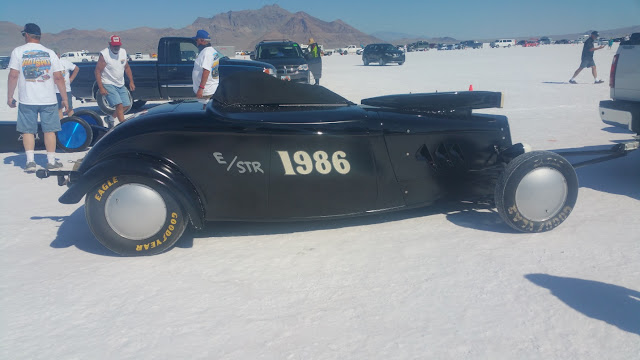 Saturday was really crowded with so many people trying to “qualify” for a record.  The process to set a new land speed record is a little complicated.  The track is marked off into discrete one-mile segments with timing apparatus at the start/end of each mile.  First you need to make a pass down the track with your average speed recorded at each mile.  If your speed in any segment is greater than the current record, then you are “qualified” for a record attempt.  Your car (or motorcycle) is then taken to an impound area and you are “clocked in”.  You and your crew have exactly four hours to prepare your car for a second run the next morning.  Your car remains sequestered overnight.  The next morning you proceed in an orderly fashion to the starting line for your attempt to “back up” the prior run.  Your speed in the same mile segment from the prior day is averaged with the time on the second days’ run, and if the average of the two runs is faster than the existing record, you are the new record holder!

Realizing the importance of the early morning runs on Sunday, Don, Lou, Thomas and I headed for the Salt Flats early on Sunday morning arriving before sunrise! 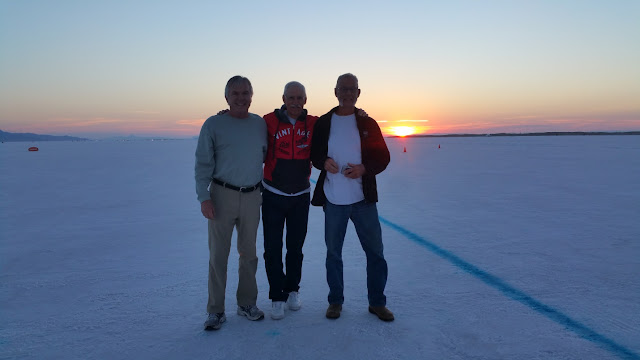 Once again we secured the “Bingham Suite” at the starting line.  As each qualified car came to make their second run, everyone was hoping for new records and big crowds would gather near us.  The greatest crowd interest was to see if Danny Thompson, son of the legendary Mickey Thompson, could break the current record with his father’s forty eight year old car.

Mickey Thompson was the first American to break the 400 MPH barrier in 1960 in Challenger 1.  Challenger 2 was constructed by Mickey in 1968.  Although the car held the promise to break the land speed record for its class, a full-fledged record attempt was never made.  Mickey Thompson and his wife, Trudy, were murdered at their California home in 1988.   Now, decades later, his son, Danny has restored the car and brought it to Bonneville this weekend in an attempt to set a new record for AA/FS. 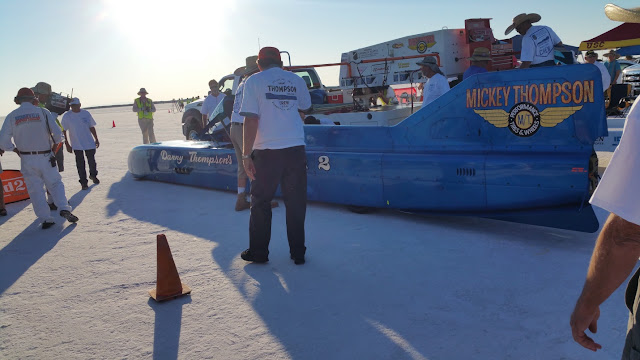 The qualifying run on Saturday was 411.191 MPH.  On Sunday there was nervous excitement to see how Danny would do.  With family and close friends serving as pit crew, Challenger 2 was staged at the starting line.  The second pass was clocked at 402.348 MPH, yielding an average speed of 406.7 MPH, enough to break the existing record.  So it was a historic day for the Thompson family and their many fans. 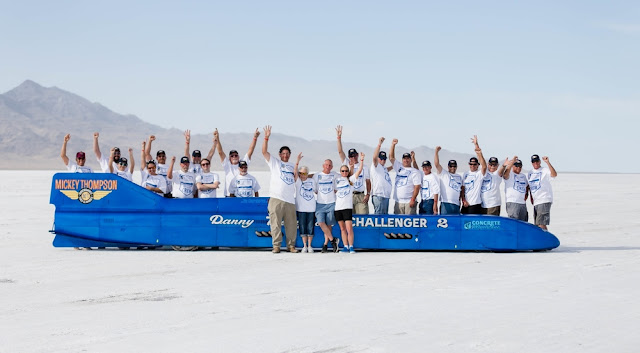 In the link below you can see video clips of the record-setting run and the tribute of Danny Thompson to his father.

Sunday was electric as we watched crews euphoric over new records, or heartbroken over failure.  As the day wore on, we ventured over to see a car that is well-known to Lou and Thomas – “Target 550”.  Treit and Davenport are intent on breaking the current class record by 100 MPH!  We were able to visit their tent to watch the final preparations for their record attempt.  The workmanship and design of the car were amazing.  More like aviation components, each panel of the streamliner was a work of engineering and machining art. 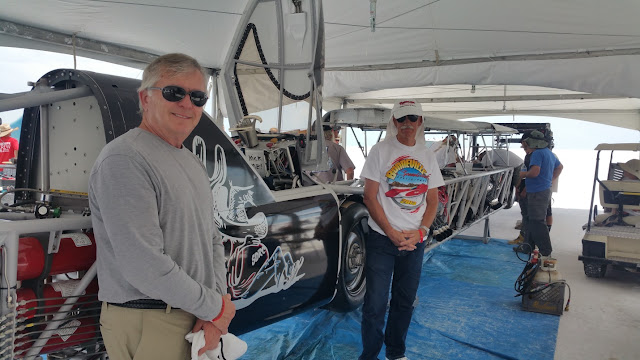 The crew was struggling through a number of issues – Lou was helping solve them.  Don,Thomas, and I contributed by staying out of the way by going to eat some ice cream.  They finally got all the bugs worked out and on Tuesday they made a “maiden” pass down the long course at a speed of 350.419 MPH.  They followed it up with a faster pass on Wednesday at 385.463 MPH.  They will be back next year with high hopes of improving on those times I’m sure. 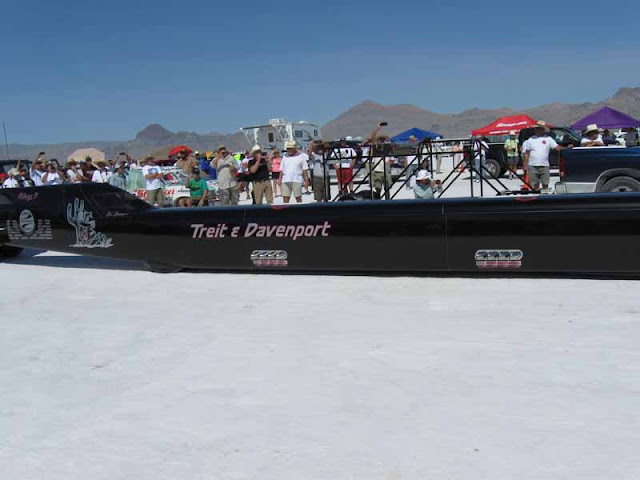 Sunday night Thomas treated everyone to dinner at the Salt Flats Café, the best Mexican Food at the Wendover Truck Stop.  You won't find beer on the menu, but if you wink at the waiter you can order “special apple cider” that tastes a bit like a Corona.

Monday was a near-repeat of the prior two days with lots of people “just wanting to go fast.”  Midmorning we had a blunt reminder of how powerful, and dangerous, the engines are.  As a beautiful 32 Roadster (with an exposed blower) was getting ready to make a run we heard a really loud noise.  The blower of the car exploded spewing big metal parts out of one side.  One large piece flew past people’s heads and landed in the windshield of a nearby truck.  With people standing so close it was a miracle that no one was injured. 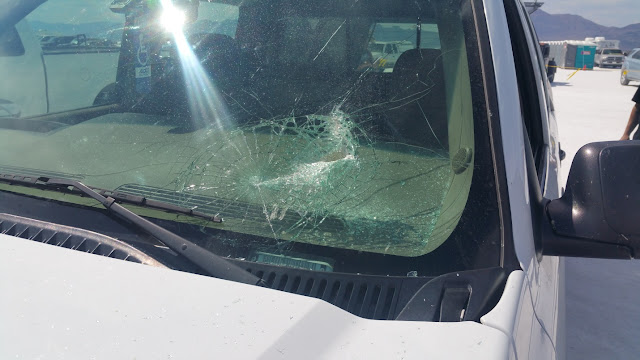 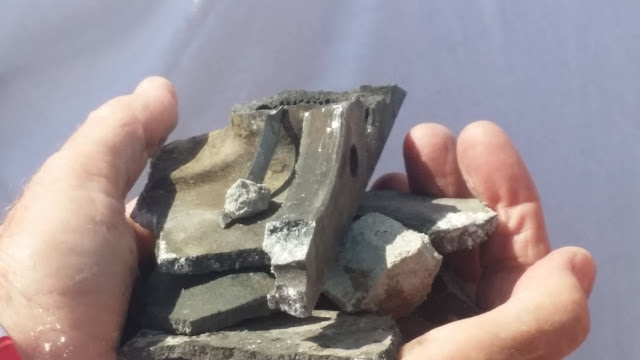 Bonneville is adjacent to the town of Wendover which is as famous for its airport as the racing.  Wendover was the training and launching point for the Enola Gay, the airplane that dropped the first atomic bomb used in combat in WWII.  The airport is rich with history.  Thomas, Don, and I, all pilots, had to stop by for a visit.  The museum was interesting as it chronicled the scale of operations during and immediately after WWII.  At that time Wendover was the largest airbase in the USA.  There is a movement to preserve some of the history and we hope they are successful.  I was reminded that years ago, when I owned a Varieze, my flying buddies would race their airplanes at remote locations, and Wendover was one of them.

On Tuesday morning Don and I departed early for the long drive home.  We made really good time to Vegas and beyond, stopping only long enough to take on fuel and get rid of coffee/cokes.  Then just north of the Cajon Summit we noticed the unmistakable evidence of a California wild fire. 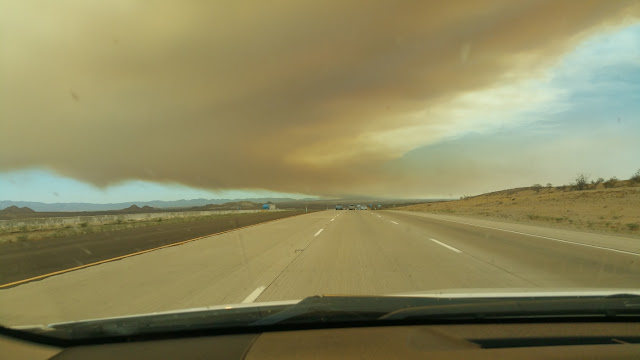 Our excitement of the past few days wasn’t complete.  The Cajon pass (Interstate 15) was closed in both directions.  Our first diversion tactic failed – as we moved to the west, the roads we planned to use were also closed.  So we ended up driving back toward Vegas, then to Big Bear, over the mountain, and back down to reconnect with I15 south of the rapidly growing fire.  (As I’m writing this article on Saturday night, four days later, the “Blue Cut” fire is still uncontained, covering 37,000 acres).  After 14 hours, we finally arrived in Carlsbad tired and hungry.  Nancy fed us a yummy dinner while we filled her head with stories of the prior five days.

It was an amazing trip – a unique experience enjoyed by few.  Don and I want to thank Thomas and Lou for an experience of a life time watching people that just want to go fast.