Darryl Richards and I have known each other for almost 50 years.  He was a regular at Beltsville Shell and he sold his 1957 Corvette to my brother, Wayne.  Darryl plays a prominent role in Beltsville Shell: You Are What You Drive, he helped me get reconnected with Sharon Cox (who started the whole Corvette thing  for me) and we have remained close all these years.

This month we both have had a big laugh over a common experience we have shared but never realized.  We were talking on the phone the other day and Darryl told me about a very rare Maryland license plate he acquired.  It is a “Tercentenary” plate – celebrating the 300th anniversary of the founding of the Colony of Maryland by Cecil Calvert, Lord Baltimore, when the Ark and the Dove arrived at Clement's Island near what became St. Mary's City.  I told Darryl that I should buy the plate from him because it would remind me of the very brief period of time when I owned a 1934 Ford.

I found the black two door (suicide doors) three window coupe in a guy’s back yard in old College Park while I was at High Point High.  It had a frame, body, full fenders, some suspension parts, but no engine, transmission or interior.  Equipped with teenage enthusiasm and a J C Whitney catalog I was preparing to install a dropped front axle, convert to hydraulic brakes, and put a Chevy engine in it.  The car was sitting peacefully in my parent’s back yard patiently waiting for me to have the coolest street rod in Beltsville.  Every morning at breakfast my Mom would give me grief about the old Ford.  She felt the neighbors were gossiping about it and would criticize her for having a junk yard in the neighborhood.  Finally, after endless daily nagging, I succumbed to her pressure and I placed an article in the Washington Post to sell the car.  In an instant two guys from Virginia showed up at my house with cash, a trailer and a truck for all the spare parts.  My dream of a ’34 Ford was gone forever.  Every January when I go to the Grand National Roadster Show and I see all those beautiful ’34 Fords, I relive my brief experience with my three window coupe.

When I told Darryl my ’34 Ford story he said that he once owned a ’34 Ford.  Our conversation went something like this:

We laughed so hard when realized that we had once owned the same car and all these years never knew it!

Yesterday Santa dropped by the house in Carlsbad and he left something very special under my Christmas tree.  Maybe this present deserves to be affixed to a ’34 Ford some day!  Thanks, Darryl, you are the greatest friend ever! 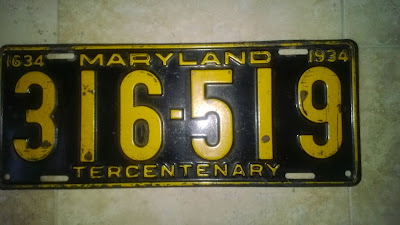 
As my close friends know, I “pick up” new friends in gas stations.  I suppose it is a habit I started at Beltsville Shell.

About 12 years ago I was putting gasoline in my 1962 Corvette at the local Chevron station when I noticed a beautiful new 2002 Torch Red Corvette coupe.  I walked over to the owner, Jeff Smith, introduced myself and told him what a great car he had and that I have never driven a C-5 Corvette.  Jeff complimented me on the 62 and offered to give me a ride in his car.  We drove our Corvettes to my house and Jeff let me drive his car.  I was instantly impressed with everything about it.  Nan came out to see the car and she liked it too.  Right then we realized that the next model year would be the 50th Anniversary Corvette and we began making plans to buy one.  So you could say that it is Jeff’s “fault” that I have a C-5 Corvette.

Jeff and his wife, Sherri, became friends with all my Corvette buddies and they have attended virtually all of our Corvette events for the past 10 years.  Shortly after we acquired the 1967 Corvette Coupe last year Jeff stopped by the house to inspect it.  Although he didn’t say anything to me at the time, his mind began to wonder if buying a 1967 Corvette might produce a more satisfying and profitable return on investment that his bond portfolio.  And as readers of Beltsville Shell know, Jeff’s first ride in a Corvette was when he delivered a 1967 Corvette from a car dealership to its owner back in 1967.

Jeff began searching the country for the perfect 1967 Corvette for him and he located it in Chicago. 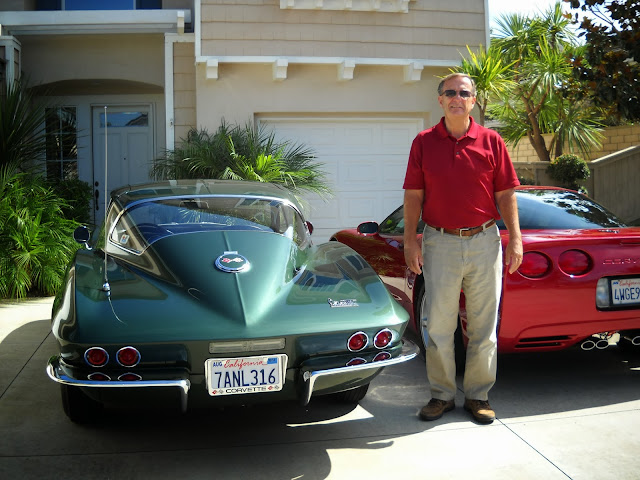 Jeff’s car had been in storage for about 12 years in Michigan.  A buyer (Buyer #1) purchased the Corvette and moved it to Chicago with the idea that he and his son (along with a restoration shop) were going to restore the car as a family project.  Unfortunately Buyer #1 died and the son didn’t have the heart to complete the project.  Then a fellow named Mike Bianco, also a Chicagoan, became Buyer #2 when purchased the car and completed the restoration in about four years.  When Mike decided to sell the car Jeff became the new owner (Buyer #3).  The restoration is beautiful and the car is fully supported with full documentation.   Mike is even providing Jeff with photos of the restoration to authenticate everything that was done for the car.

So I guess you could say that after 10 years I have “returned a favor” and it is my “fault” that Jeff Smith has a 1967 Corvette!