I have always been naive.  I must have been 13 years old before I figured out that "professional wrestling" was actually rigged.  Now image how upset I am to discover that the results of the ALMS racing and the new series, IMSA Tudor, have been rigged by behind-the-scenes rules that alter the performance of the cars.  The fiddling by the race managers is called "Balance of Performance" or "BoP".

The overall goal is to make the cars, Aston Martin, BMW, Corvette, Ferrari, Ford, Porsche, Viper, etc.  "competitive".  The various cars are helped or handicapped by adding or removing weight, increasing or decreasing the fuel tank capacities, and increasing or decreasing the intake restrictors.  You would think that at the beginning of the season adjustments would be made and then the IMSA people would leave things alone.  Not true.

You will remember how flabbergasted I was in the 2014 season when Corvette started the season dominating the field, and then, suddenly Corvette was finishing at the back of the pack!?

Well, now we know why!  The IMSA boys moved the goal posts!

Some race officials have been overheard to say things like, "We need to spread the wins around."  In the above graph you can see that the Viper team wasn't competitive early on. Then BoP adjustments were made to "encourage" them to remain in the the GTLM class.  They finished 2014 in top form, but dropped out of the GTLM class in 2015 to race in the next level down.

This punishment against Corvette continued in 2015.  Again, after dominating early in the season, the Corvettes were saddled with more weight than any other manufacturer, and allowed to carry less fuel than any of the competition.  Last year the situation got so bad that Jan Magnussen, Corvette team driver, finally expressed his frustration publicly.  Here is a clip from a September 11, 2015 article by Sam McEachern:

Jan Magnussen writes frequent columns for Motorsport.com, and this week used the space to address the unfair Balance of Performance rules being handed down to the Corvette Racing team as the 2015 TUDOR United Sportscar Championship season begins to come to a close.

You may have noticed Corvette Racing’s No. 3 and No. 4 C7.Rs finished uncharacteristically far back in the running order at the recent Oak Tree Grand Prix at VIR. This is because series rule makers have slapped the car with Balance of Performance adjustments designed to give Corvette Racing more of a challenge, putting them at a significant disadvantage to the Porsches and Ferraris.

As a result of these BoP adjustments, the Corvette C7.R is currently the heaviest car on the GTLM grid with the smallest fuel tank. (note:  Porsche is now heavier)  Magnussen says they are a victim of their own success, with IMSA likely sticking them with the BoP adjustments after their wins at Daytona and Sebring earlier in the year.

“It’s frustrating as hell,” Magnussen writes. “But that’s what we got, and it will be what we have at COTA and Petit Le Mans. We’ll just have to make the most of it and make sure that we’ve done all that we can.”

The situation was so egregious in 2015 that the Corvette fans started a petition to protest the BoP penalty against Corvette Racing:


But all the complaining didn't make any difference.  Although Corvette swept the three endurance races in 2015, the BoP adjustments handicapped the team for the entire 2015 season, as depicted below:

So what can we expect in 2016 after the Corvette 1 - 2 finish at the Rolex 24 at Daytona?  You guessed it!  More restrictions.  We are told that the BOP adjustments against Corvette will be an increase of 10Kg of weight (22 pounds) and a 0.4mm smaller intake restrictor for the second race.  Hopefully these changes will not make the Corvettes noncompetitive in 2016!

Maybe we can get Hulk Hogan to help out!?

On November 14, 2015 we held the 14th BSYAWYD Reunion.  It was hosted for the seventh time at Herman's Garage (thank you Herman, and Tom, Bonnie, and others for all the arrangements). 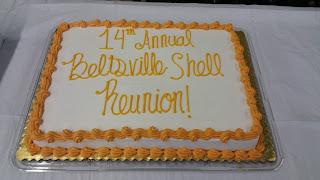 Highlights of this year's event were characterized by longevity:


Gary Manley arrived in his 1939 Ford Deluxe.  Gary bought the car in 1970 as an empty shell on a frame and had it driveable in a few months.  I fondly remember that car parked in Gary's yard on Sellman Road in Beltsville.  Gary has driven that car all across the country (watch for more details in a future blog post). 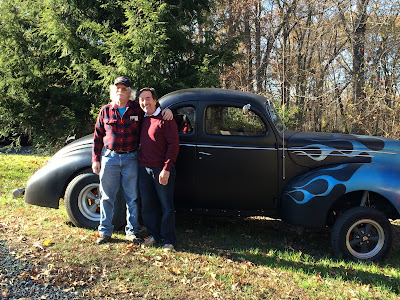 Malcolm Van Kirk arrived in his 1964 Corvette that he has owned since 1966.  Malcolm is the second owner, purchasing the car from a furniture designer named George Merritt.  There are some great stories about the Corvette that will also be told in a future blog post! 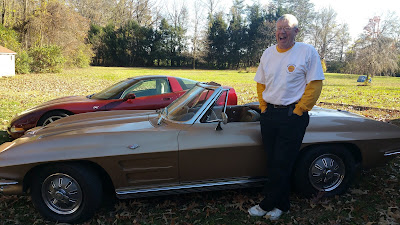 Sonny Boteler and Nace DeLauter continued their streak of never missing a reunion since the first one in 2002, and Tom Hontz has attended every one since 2003!  Nothing better than life-long buddies! 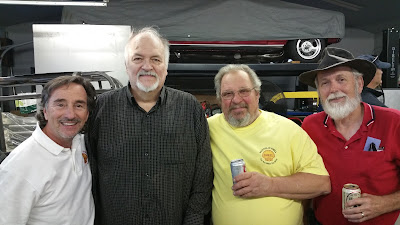 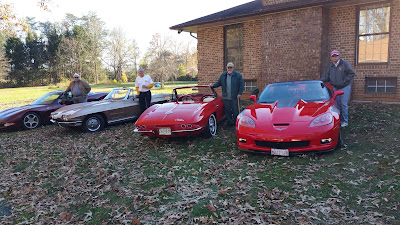 It was a beautiful autumn day in rural Maryland.  Thanks to everyone who attended:

In attendance but not shown: Al Beck, and Nancy Paul Thomas.

Posted in fond memory of Sam Powell who was unable to attend this year.

The most thrilling victory for Corvette Racing, dating back to 2001, may have transpired this past weekend as the C7.R Corvettes finished 1 - 2 in the GT Le Mans Class (GTLM) at the Rolex 24 Hours of Daytona, the first race of the 2016 IMSA Season. 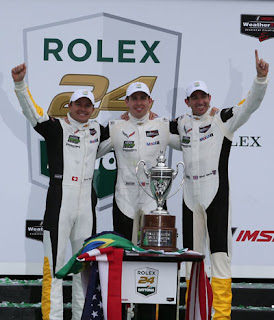 Team Corvette dominated the endurance races in the 2015 season with first-place victories in the 24 Hours of Daytona, 12 hours of Sebring, and the 24 hours of Le Mans.  It is nice to see 2016 starting off as well.

This race was the closest finish in the history of the Rolex 24 with one Corvette beating the other Corvette to the finish line by only 0.034 seconds! 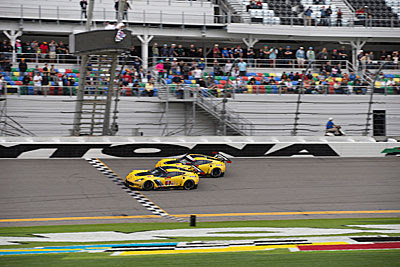 The back story is really wild.  The No. 4 Corvette, the eventual winner, started the race in 7th position but driver Oliver Gavin moved up to third place after just five laps.  Team mate Tommy Milner set the fastest lap time of any GTLM car up to the 12 hour mark.  The No. 3 Corvette ran strong all day too.  As the final half-hour approached, Antonio Garcia, driving the No. 3 Corvette was in third place behind the No. 912 Porsche with the No. 4 Corvette in first place.  Once Garcia passed the Porsche, with the Corvettes running 1 - 2, Doug Fehan, Corvette Racing program manager, "issued no team orders", meaning that the two Corvettes were free to compete for the win!  One writer described the final 20 minutes as follows:


After the two Corvette GTLM cars got around the class leading #912 Porsche 911 towards the end of this year's Rolex 24 at Daytona, Corvette Racing Program Manager Doug Fehan gave his drivers permission to race each other. What followed was the most spectacular 15 minutes of racing many have ever witnessed.


The #4 car, driven by Oliver Gavin, was in the lead, but the #3 car, driven by Antonio Garcia was on a fresh set of tires. Garcia chased Gavin hard, attempting NASCAR-style drafting passes on his teammate.


The announcers for IMSA Radio are flabbergasted: They've never seen racing like this, especially not after 23 hours and 45 minutes of continuous, grueling racing.

The Corvettes were trashed after the race! 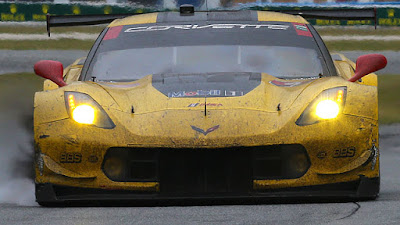 Here are a few video clips so you can experience the wild finish:


IMSA Recap of Rolex 24 at Daytona

The finishing positions by manufacturer are: