Today, June 6th, marks the 72nd anniversary of the Normandy invasion of the coast of France in WWII.  Emotional history.

With Don and Shirley, Nan and I, assisted by 25 die-hard Corvette Racing fans, are getting ready to have our own invasion of France -- of the 84th running of the 24 Hours of Le Mans!


Paris is flooded, the unions are on strike, the Louvre is closed, and the two-car Corvette team is outnumbered by it competitors (including three Ferraris, three Porsches, two Aston Martins, and FOUR Fords), but we are heading to France with high hopes.  After last year's dramatic victory, in which a single Corvette finished in first place (about 35 miles ahead of the second-place Ferrari), the National Corvette Museum decided to take 29 of Corvette Racing's most faithful fans to France this year to tour Paris, Versailles, Normandy, and then to participate in all the racing pageantry and the race.  We are ready!

Here is a recap of last year's race:


The drivers will cover more than 2,800 miles (imagine 5+ Indy 500 Races back-to-back) racing through the night, in all likelihood in the rain, changing gears more than 19,000 times, circling the 8.5 mile course in under four minutes, in the most famous endurance race in all the world.


In testing on Sunday the #63 Corvette was fastest in class, followed by two Porsches and 4th place went to the #64 Corvette.  Hopefully this result portends a good performance.

Best of luck to Corvette Racing!  We will be there to cheer you on! 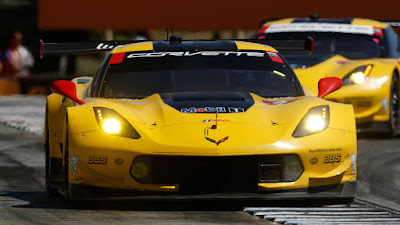 Spending the Day on The Dark Side

In a complex transaction that I don't fully understand involving donations to a worthy Vista California Charity, my next-door neighbor, Greg, ended up with a certificate entitling two people to spend the day riding in exotic Italian sports cars, to be chauffeured in said vehicles to a Temecula Wine Tasting luncheon.  Greg invited me to join him (lucky me!).  Thus began a Day on The Dark Side!


At 10 in the morning, Greg and I drove out to Vista in Greg's 1969 Cadillac (I will be posting a story about the '69 Caddy soon) to meet up with "Brad" and "Ron".  Ron owns a beautiful estate in the hills of Vista, California.  As soon as we drove up to the house I knew the day was going to be really special!  I tried not to talk about Corvettes too much -- this is my version of being "politically correct"!

Sitting in Ron's driveway was a Ferrari F430 and a Lamborghini Aventador.  Collectively these cars are worth more than the median price tag of a San Diego house!  Each car maker tries to out-do the other in many ways.  Both cars expose the powerful engines to the public through rear portals. 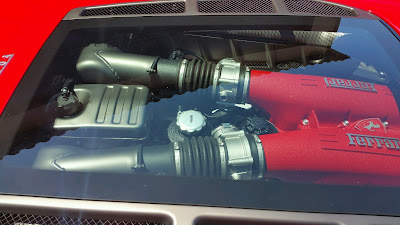 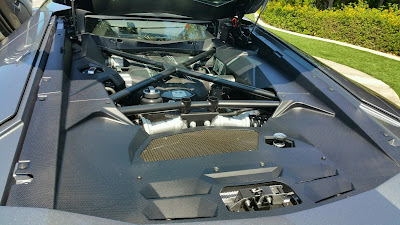 The deal was that Brad would drive the Ferrari with me as passenger, and Ron would drive the Lambo with Greg as passenger up to the Winery.  Then on the way back home we would switch places so that Greg and I would each experience both Italian marques.  I don't think they wanted to let me drive because they must have talked to the instructors at the Ron Fellows Corvette Racing School.  As Ron started the powerful cars I wondered if my life insurance was paid-up?


Before long we were off to Temecula driving east on the California 78 Freeway and then North on I-15.  Brad drove Ron's car like he owned it (or perhaps stole it).  Pity the poor SUVs and Prius cars as Brad swerved in an out of traffic, paddle shifting the Ferrari with a vengeance, and scaring everyone (except his passenger).  From time-to-time Ron would catch and pass us.  It was crazy fun rat-racing to the winery.  How we avoided a ticket (or two) is a mystery.

As we were exiting the I-15 we noticed a brush fire that had just erupted.  Smoke billowed into the Riverside County sky.


When we arrived at the South Coast Winery it was 101 degrees.  The cars handled the aggressive driving and heat with no problems.  The dining room was spacious.  The menu had great lunch selections, and the wine list offered plenty of options.  Ron and Brad went alcohol-free, but Greg and I decided we needed to sample the vino.


By the time the lunch was over the fire had spread,  smoke had rolled up the hills to the winery, and I-15 was closed.  We needed to find a way home.

Undeterred, I charted a course through rural San Diego hillsides to get us back home.   The country roads, winding, climbing up and down, and weaving through the hills provided a new experience for these exotic sports cars.  The drive home was slower, and took more time, but was equally enjoyable to the drive to the winery.  When we arrived back at Ron's house we were very happy!

It was interesting to me to compare and contrast the cars.  The Ferrari emitted a sound that was infectious.  Its 4.3 L V-8 engine loves to be driven at a minimum of 4,000 RPM.  It lacked the torque that is familiar in a Corvette, but makes up for it with virtually no red-line and 490 HP.  You just want to drive the car as fast as you can as long as you can.  The Lamborghini engine seemed more refined, which is odd since the engine is a V-12 putting out 690 HP --200HP more than the Ferrari.  Both had paddle-shifter automatic transmissions.  The Lamborghini, with its rock-solid body, costs roughly twice as much as the Ferrari.

It was interesting for a "Corvette Guy" to go to the Dark Side and spend a day with two Italian legendary cars.  Would I buy one?  Well, if the Lottery Fairy left something special under my pillow I would be really tempted to own one of these rockets.  They are very,very special.

Thank you, Greg, Ron, and Brad for a great day, one that I will remember for a long time!