I have thoroughly enjoyed joining the world of Vintage Karting, “sparked” by the purchase of “Sparkle”, the 1962 Fox Kart that is identical to the Kart I owned as a teenager. We took Sparkle to our first Vintage Karting Association event in October 2016 in Bakersfield. Sparkle won an award for “Best Restored Rear Single (engine)”

Shortly after Bakersfield we learned that an historic Vintage Karting Event was going to be held in near-by Riverside, California in February of 2017 – the 50th Anniversary of the 1967 IKF Sprint Grand Nationals  held at the Adams Track. We agreed that this was an event that was not to be missed and began making plans to participate. 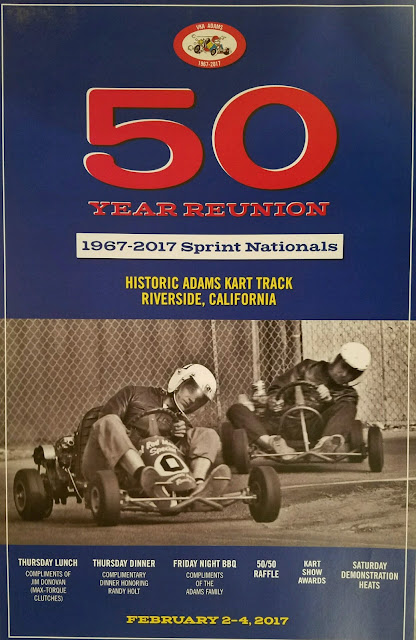 Sparkle is a “show only” kart. So that we could actually race a kart, we purchased a second one that we have named “Shine”. The timing of the Riverside event created a deadline requiring us to get Shine fully restored and ready to race by February. The restoration of Shine was a fun and interesting process. Here is the completed project. You might think of the photo below as the “after” photo. 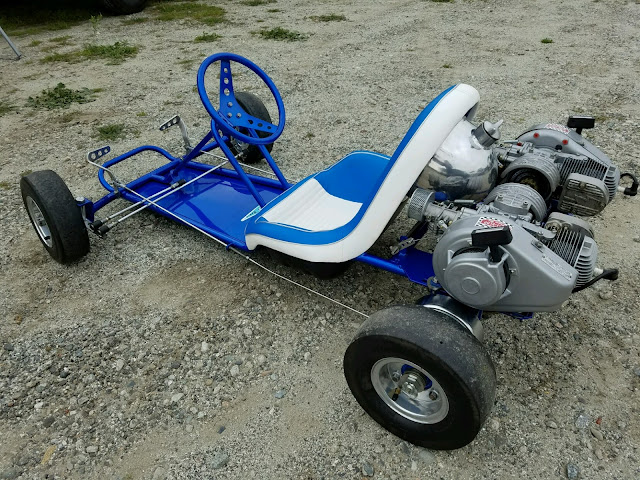 Shine is a highly original 1961 Fox GO-BOY. Randy Gryczkowski found it in Minnesota in its original state. You might think of the photo below as the “before” photo. 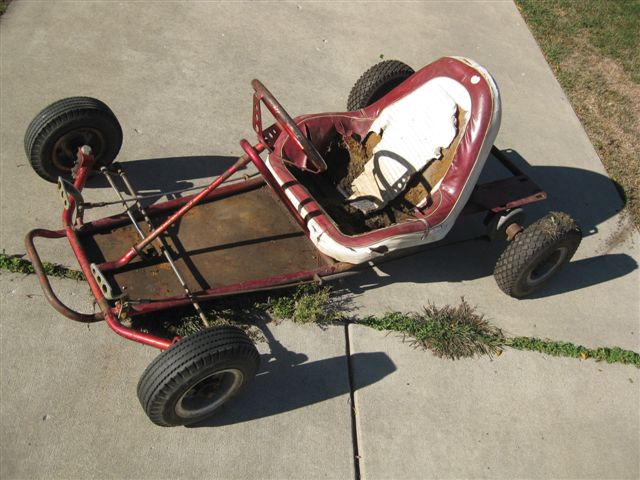 The kart was found with its original: frame, wheels, steering rods, steering wheel, seat, gas tank, brakes, and pedals. It was missing an engine and engine accessories. Working out of his shop in Wisconsin, Randy disassembled the kart for me, worked with Joel Christians to check the frame alignment (it was perfect!), cut out the old rusty floor pan and welded in a new one, sand blasted the frame and shipped it to me in California. He retained the original seat shell and the original aluminum gas tank. We contracted to have Mike Vranak (Mike’s Custom Upholstery) reupholster the seat and Joel to restore the aluminum gas tank by meticulously taking out all the dents and polishing it to its original beauty.

Meanwhile, back in California I went on a hunt for the missing parts, seeking original versions as much as possible. I received tons of help from experts:


The assembly went smoothly. Vince stopped by the house frequently to inspect my work and to help solve a few problems. He also let me drive one of his karts at the Adams track in Riverside the day after Thanksgiving to rehearse for the February event. Special thanks to my neighbors too for letting me make a few banzai runs around the cul-de-sac before heading to Riverside. 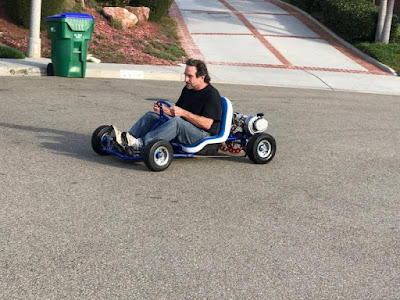 Nancy and I rented a big cargo van so we could take Sparkle and Shine to The Adams Kart Track. We arrived on Friday morning to overcast skies and rain showers. The pit area was filled with Karters from all over the world. I will write a blogpost soon about the event itself.

Friday morning was filled with polishing Sparkle and getting Shine ready to race. Louie inspected Shine to be sure it passed the Tech Inspection (it did).

Vince helped me adjust the carburetors. 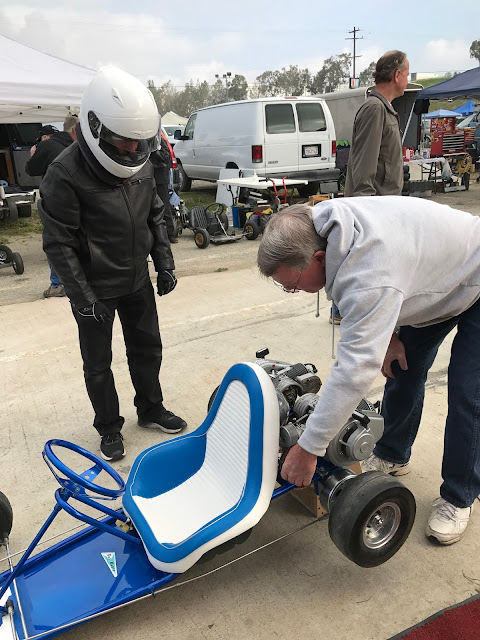 Jim Donovan inspected the clutches and declared them ready to race. 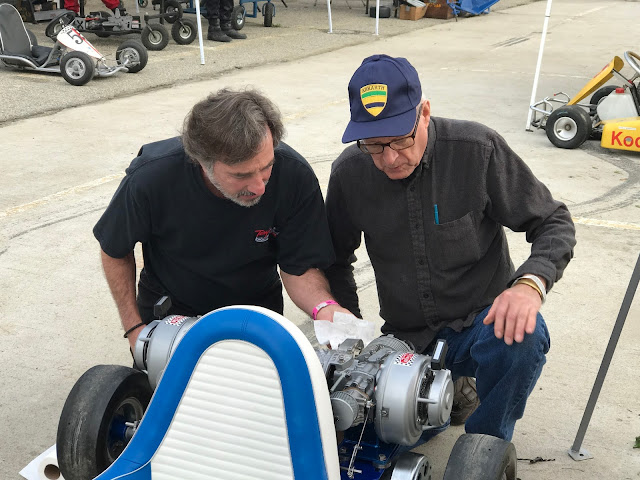 I took a few practice laps before the afternoon rains came. 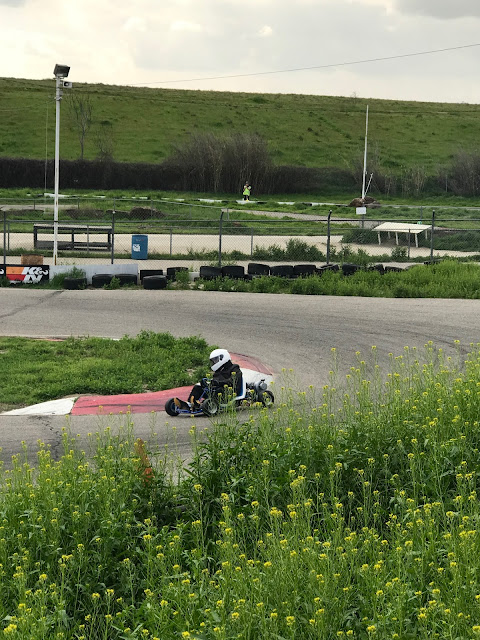 At 4PM the judging began for various classes of Karts. The lineup included some of the best Karts I had ever seen representing a wide variety of manufacturers from 50 years ago. 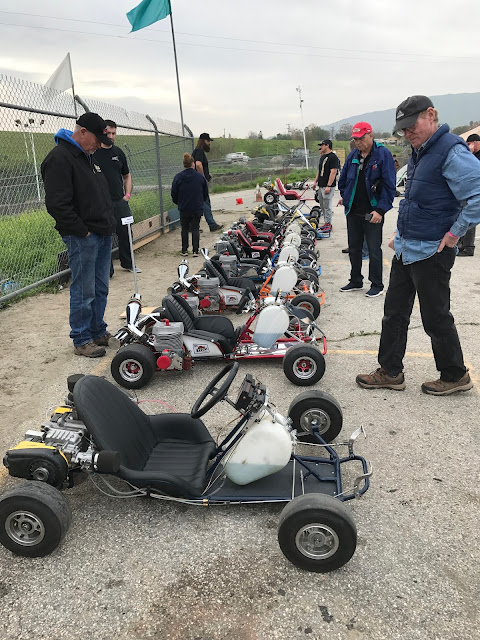 At the Friday night dinner I was completely shocked to learn that Shine won the award for best “Restored Original Rear Engine.” Here is Louie Figone presenting the award. 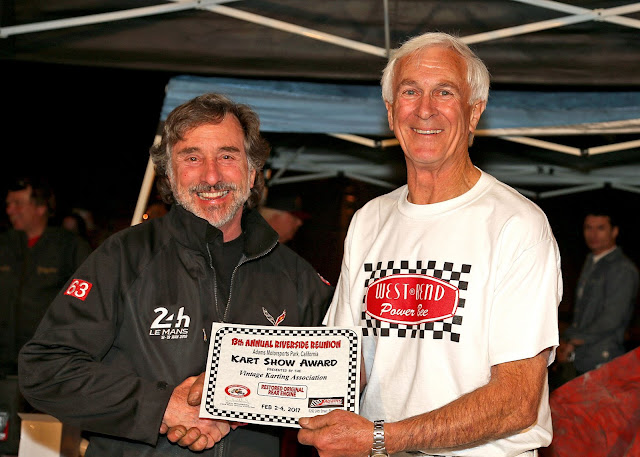 Saturday was for racing! The cloudy skies and drizzle of Friday were replaced with overcast skies, but the weather was good enough for racing.

Many vintage karting fans encourage young people to get involved. My 50th Anniversary Corvette buddy, Larry Barnes, took a young man from his Church, Kalob, for his first Corvette ride, bringing him to the track. Kalob is very interested in Karts. Here he is trying out Shine. 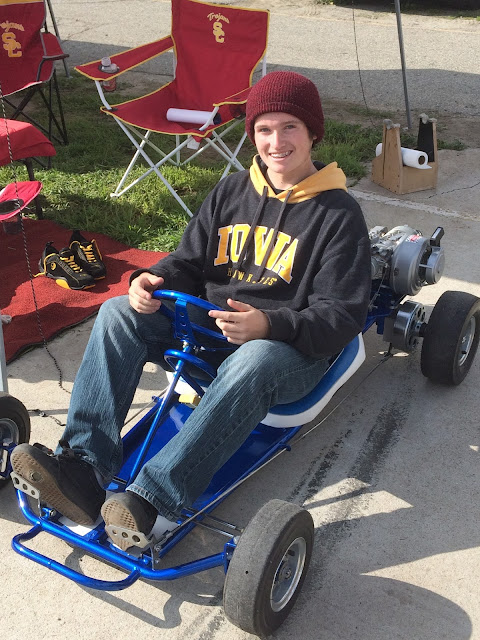 Scott Wigginton races with his son, Adam. Here they are with two of their many karts. 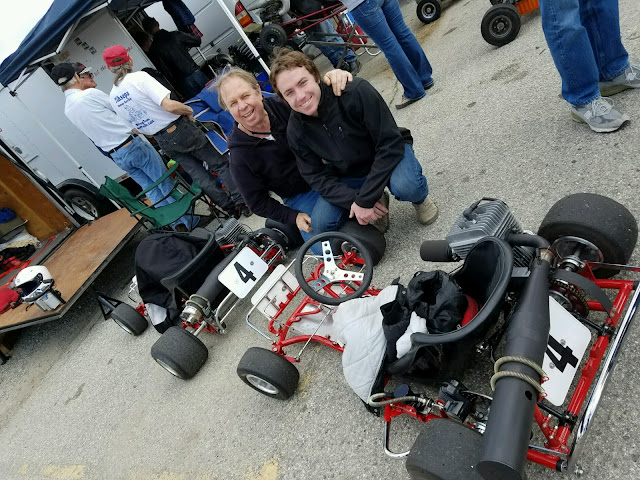 We ended the day with Shine “racing” (we are, technically, not supposed to call it racing – its “demonstration driving”) in the first heat. I didn’t crash, spin-out, or leave the track, so I declared this outing a complete success for Shine!

Vince says we need a bit more tuning, so in April we will go back to Bakersfield. Come join us!