Flying the ICON A5

Regular readers of this BLOG will remember that in August I attended the "Quail" event in Monterey:

Although I saw dozens of $1+ million cars, the vehicle that got most of my interest was the ICON A5 amphibious aircraft.

As I was walking the grounds of the Quail, I rounded a corner, that there it was! 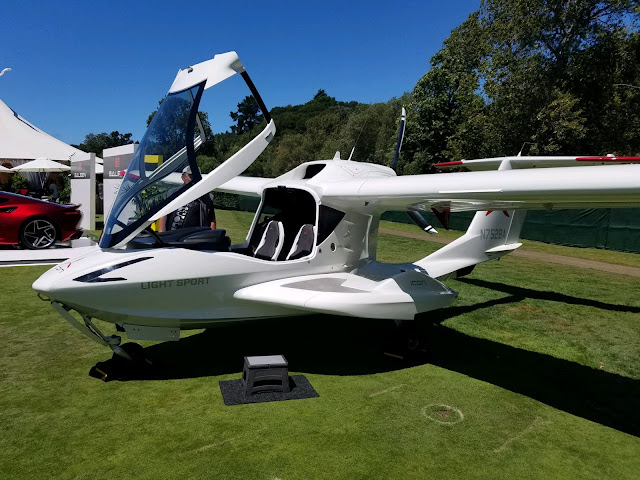 In recent years I've had the chance to explore "Light Sport" aircraft, and to fly a few of them.  The ICON always held an interest for me because if its "pusher" configuration (reminiscent of my Varieze), composite construction, and ability to operate from land or sea.

I had seen the ICON on the Internet, but this was the first time I had seen it in person.  Oh gosh, it was so cool!  Their website generates interest in the many capabilities of the aircraft; click the link below for a fascinating demonstration of this amazing airplane:

Noah Collins greeted me at The Quail and pointed out the highlights of the ICON A5.  Everything about it was cool.  We talked about its similarities to the Varieze, making me want to go for a ride.  When I asked if there were any models based in San Diego, Noah told me that I could see one at the Montgomery Airport.

As soon as I returned from Monterey I began exploring a demonstration flight with Noah.  Noah was graciously accommodating.  It was my luck that we coordinated a day that offered clear skies and calm winds.  Nan drove me in the Z06 to the airport where we rendezvoused with Noah.  I was completely confident in flying with Noah in a new airplane -- he is a graduate of the US Naval Academy and was a Naval Aviator for more than 9 years.  Noah has "the right stuff"! 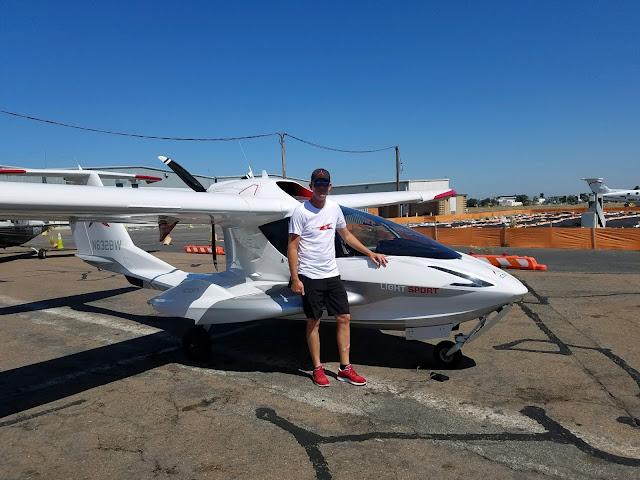 After pre-flighting the plane, Noah let me fly left seat with him in the right. The controls were the reverse of the Varieze -- stick in the left hand and throttle in the right.  But everything else was modern and easy to master.  The Rotax 912 engine smoothly spun the three-blade propeller, and the cabin was quiet with the engine mounted behind the high-wing.  Ground maneuvers were also the same as the Varieze with differential braking to control the castering nose wheel.

The tour Noah laid out for me included a takeoff to the west, a turn to the south at the coastline, flying under the departing airliners at Lindbergh Field, around the Point Loma Lighthouse then into San Diego Bay for a water landing.

The takeoff was smooth with rotation coming at about 60 MPH.  The front landing gear retracts quickly and the warning light is intuitive and easy to see.  The controls were light and effortless as I climbed out toward the coastline, getting a feel for the plane.  The full canopy made it easy to look for and identify traffic.  Noah handled the communications while guiding me through heading and altitude changes. 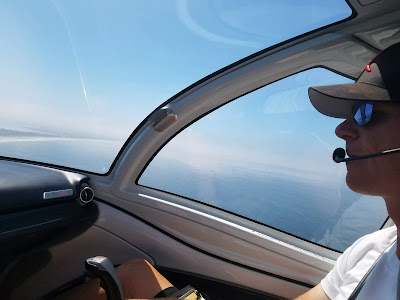 We got a clearance to fly under the Lindbergh departing aircraft and cruised down the San Diego coast between 500 and 1,000 feet. 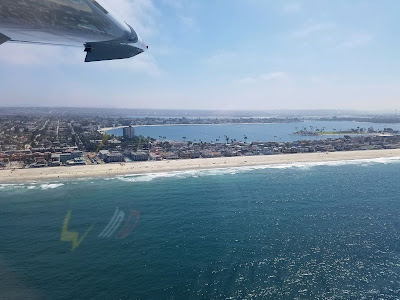 The instrumentation on the ICON is different than the traditional "six round gauges" of older aircraft, but I was able to adjust to the layout quickly and was surprised at how much I liked the change.  The moving map was great -- how I wish I had one of them back in my Varieze days. 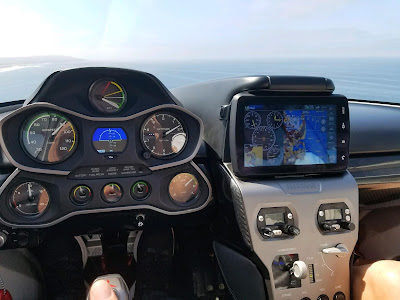 Soon we had navigated our way down to the San Diego Bay, a place we have visited with our neighbors, Carl and Jean, in their boat.  Noah coached me on setting up for a water landing, clearing the area, and heading into the wind.  We promised each other that we would guarantee that the landing gear was *NOT* down (as in a normal landing) -- one of the very few things you can do to screw up a water landing!  Noah made the first landing.  What a thrill!  as soon as the plane slowed in the Bay, Noah popped the canopy as the two of us just marveled at the fun and utility of the ICON.

Here is my video of us floating with the canopy open!

Noah let me take off and do a "splash and go" and then we returned to Montgomery field.

How would I describe the ICON aircraft and the flying experience?  Looks that can compare with the coolest sports cars. A flying platform that is intuitive and should be a very easy transition for pilots of any level of expertise. Even without landing on the water, it is fun to fly, and the water capability is just over-the-top.  I loved the experience so much that I've been telling all my pilot (and non-pilot) friends all about it.

Thanks, Noah, for one of the best days ever!

And I have learned that Jay Leno heard about my flight, which inspired him to take a flight too (which you can see on "Jay's Garage")!

If anyone wants to talk with Noah about the ICON A5, just let me know and I'll introduce you!