As I walk around the campus of The Scripps Research Institute at almost any time of the day I can hear F-18Ds screaming above the Torrey Pines mesa of San Diego, getting louder when the pilots hit the afterburners as they cross the California coastline and head out over the Pacific Ocean.  I like to call it “the sound of freedom” (as Larry Barnes would say).  Each time I think to myself, “What an amazing experience it must be to fly in a jet fighter!”  I finally found out how amazing on May 21, 2014.


Don Kingery is a dear Corvette friend.  He drives his big-block 1967 Stingray and his C-6 Corvette convertibles with passion and intensity.  Now I know why – it’s his fighter-pilot training that he brings from the skies to the street.

Don joined the Navy in 1968 after college.  Following flight training and winning his “Wings of Gold”, he earned his dream job of flying fighters out of Miramar.  He flew the F-4 Phantom in the fleet from the USS Ranger.   Following this fleet tour, he was selected as an instructor at Topgun (1975-1977), where he flew the F-5E/F, T-38 and A-4 Mongoose.  Don left active duty in 1977 and literally walked across the street to join the reserve fighter squadron, again flying the F-4 Phantom.  The reserves had all the flying money during those years and Don was more active in the cockpit than the regular Navy guys.  In 1983, he transitioned to the F-14 Tomcat and flew the “Turkey” for over 8 years.  When he finally left the USN, Don had 27 years and 4,050 flight hours in fighters.

In 1977 Don was also hired at Continental Airlines and enjoyed a 29 year career, 18 of those concurrent with his Naval Reserve flying (clocking an additional 20,000 hours).  Don flew many years international, primarily in the 767-400 to Brazil, Argentina, Peru, the South Pacific, the Netherlands and many more destinations.  After retiring from the airlines, he got the call dreams are made of….to return to flying high performance military type aircraft performing close air support.

Don’s current job is, in some ways, as serious as anything he has done in his long career – prosecuting targets for the special operations “Joint Tactical Air Commanders…JTACS” maneuvering on the ground just as in actual combat.  On each bombing run Don either destroys the target for them, or he doesn’t; his performance is critiqued as he exits the attack site by the commanders on the ground who give him a “BDA” (bomb damage assessment).  Don takes these assessments seriously.

When I first met Don he was flying the JTACS missions.  He loves it: he has told me stories about the missions, sent me joyous email and text messages when on assignment and even got Canon to edit some videos of the action that he filmed from the cockpit.  Danny Schrokosch, who introduced me to Don, once got a backseat ride and told me how thrilling it was.

In May, when Don was “on assignment”, Nan encouraged me to see if there was any way I could duplicate Danny’s adventure.  So I sent Don an email mentioning that if there was ever an opportunity to ride back-seat to let me know.  Imagine my surprise when Don mailed back, “Can you be in Yuma Arizona at 10:00 AM on Wednesday?”  Let’s see . . . is there anything on my calendar that could be more important than riding in a fighter jet?  I don’t think so!

Nan and I departed Carlsbad early on Wednesday morning for the long drive out Interstate 8 to the desert.  When we arrived at the Yuma, Arizona airfield two Alpha Jets were fueled and ready to go.  Don (whose “handle” from his US Navy days is “Dirt”) introduced me to “Cheeks”.  They have worked together on the close-support training missions many times, but each training mission is different and with new crews of young soldiers each time.  I changed into a flight suit and then the mission briefing began. 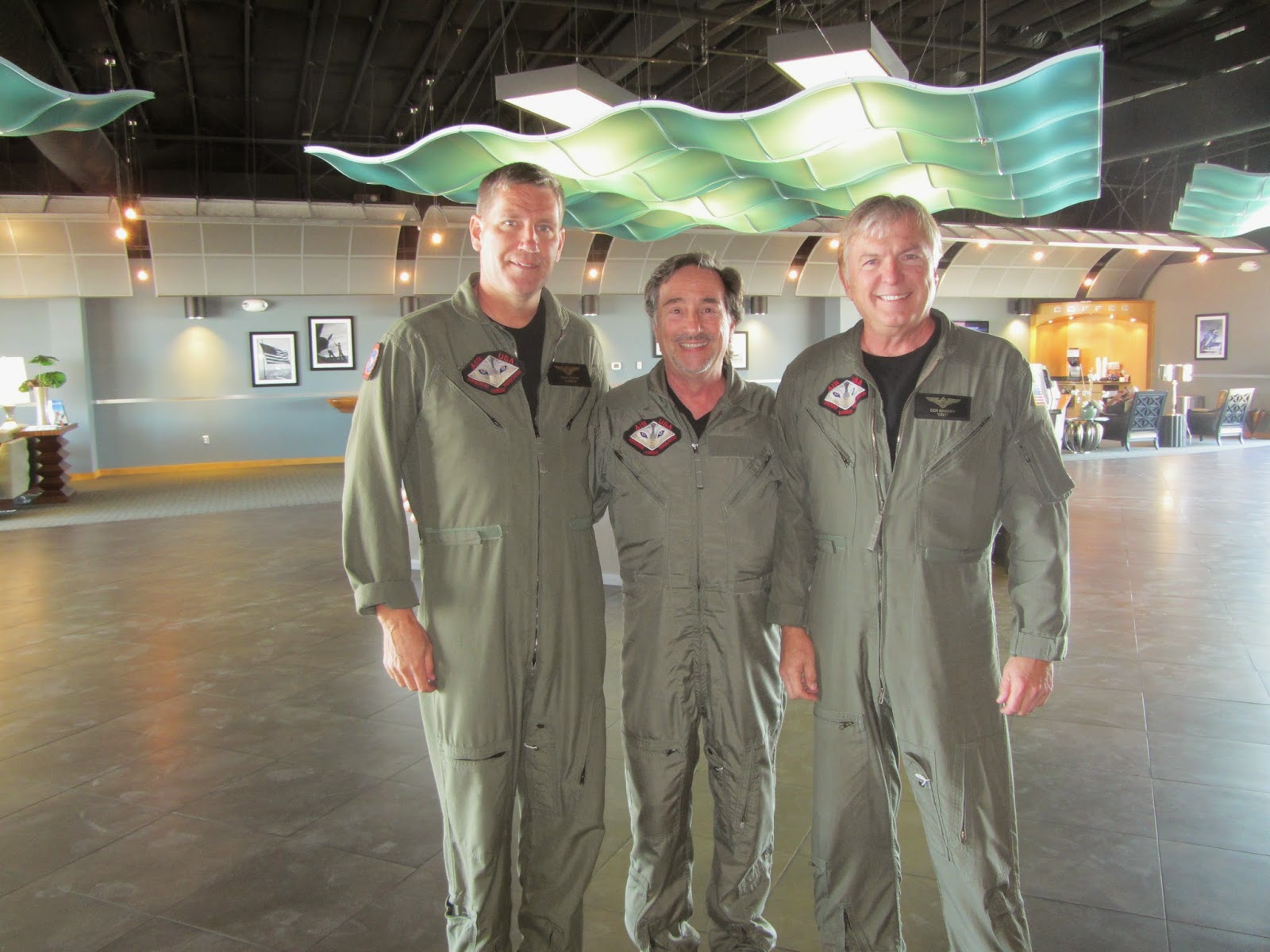 We would be “anchored” (holding) “D8” which is 8 miles to the west of the target area.  From that position we would receive all the radio communications from the JTAC giving us the “Situation Update” (what the bad guys are up to and the main threats in the target area, like SAMS, AAA, etc.), “Game Plan” (what the JTAC plan is ….the type of target, what the friendly’s are doing, etc.),  The “9-Line” (all of the specific target information…grid coordinates, elevation, target description, number and type of ordinance to be dropped, roll-in heading…bomb delivery heading, egress type and direction….and where the friendly’s are in relation to the target.)  I listened as they described all these details understanding some, but not all, of it.  Cheek’s call-sign was “Cougar one-one” and we would be “Cougar one-two”.

Don let me follow along as he pre-flighted the jet, checked the bombs, and showed me the process for seat-ejection.  He secured my helmet, the oxygen mask, strapped me into the six-point harness, strapped my legs to the seat frame, and showed me the flight controls.  Very cool and way more serious than flying a Varieze!  Don got settled in the front seat and the radio check went fine.  We taxied out in the hot Yuma sun with the canopies cracked open (no air-conditioning in an Alpha Jet!). 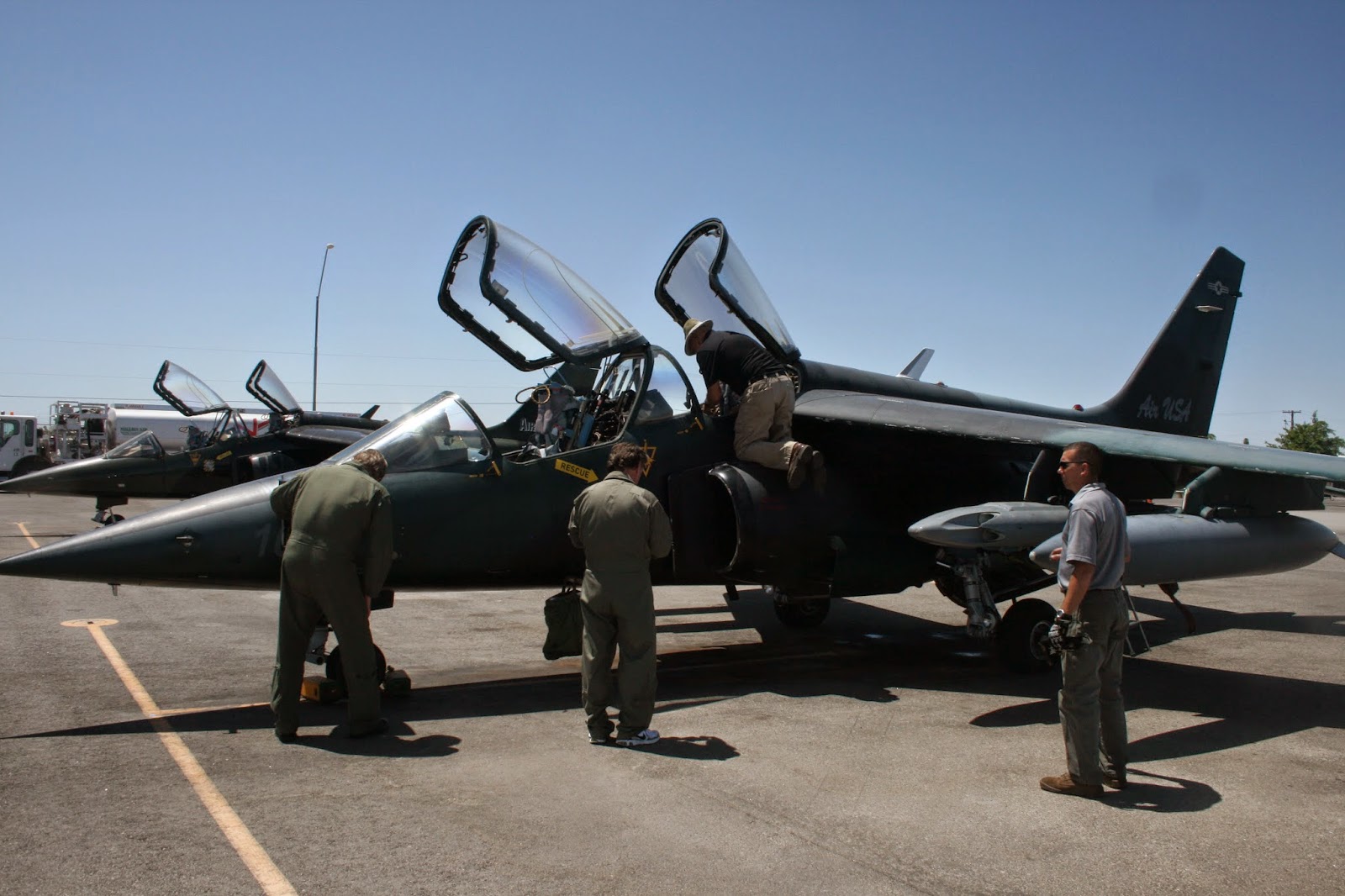 Cheeks departed first and a few seconds later Dirt was under way.  Through the canopy I could see Cougar one-one as a dot in the distance.  When we cleared the Yuma airport traffic area, Dirt (without warning) snaps a 360 degree canopy roll (in about one second) and when we get right-side-up again “pow” there is Cheeks’ right wing tip about eight feet from my head!  The next two hours would be much the same – Dirt prefers to be up-side-down over straight-and-level!

Flying in formation into D8, I could hear JTAC on the radio relaying information exactly as it was described in the pre-flight briefing.  It was amazing to see how two teams of professionals who have never met each other could achieve a precise outcome through verbal communications.  Cheeks did a great job insisting that the guys on the ground were clear and precise, so sometimes the instructions needed to be repeated more than once.  But such precision would be needed in real battlefield situations to avoid errors or casualties.  Heavy stuff.

The protocol to complete the bombing run is very complex:  Dirt would say, “Cougar one-two contact target” (meaning he had visual contact), then we were cleared “HOT” into the target area.  Dirt would then say, “in the POP”, so the JTAC can scan the horizon to pick us up visually.  At some point in each maneuver Dirt must call, “visual friendlys” so JTAC can be confident that we won’t bomb them!  And finally, “tally target” once we were 100% positive that we sighted the intended target.  Over the headphones I hear Dirt say, “Cougar one-two, in heading 075” followed by JTAC saying, “cleared hot”, and then we release the weapon(s).  Once the ordinance is dropped, I hear Dirt say, “Cougar one-two, off, one away” (or however many bombs we dropped).

Here’s how each mission felt from the back seat:  From an altitude of 6,000 to 8,000 feet and about 6 nautical miles from the target (to evade enemy radar or visual detection by the bad guys) Dirt rolls inverted (did I mention he likes to be up-side-down?), points the nose straight at the ground and down we plunge.  Our airspeed climbs quickly to 400 Knots indicated airspeed.  At what seems like the very last micro-second, Dirt pulls out of the dive, streaks across the ground with (what seems like) inches to spare, acquires the target visually, rolls in on the assigned heading, maintains the assigned altitude, arms the ejector rack, and pulls the trigger to release the bombs.  While Dirt is busy blowing stuff up, I’m in the back seat trading glances from the ground to the G-meter.  The positive G’s weren’t excessive, although the airspeed was!  As we get closer and closer to the ground I begin thinking, “OK if I die doing this with Don all my friends at the funeral will say, ‘he died doing what he loved’, which would be 100% true!”

During the pre-flight briefing Dirt had warned me that after bomb release, he likes to make a 90 degree knive-edge turn so he can see if he hit the target.  Sure enough, the Alpha Jet banks hard left and out the back of the canopy we can see a direct hit!  Dirt professionally says to the waiting JTAC guys, “Cougar one-two, off, one away” and then into the headphones that only I can hear he yells “Yaa-Hoo”.  The JTAC guys give their BDA as, “Direct hit!”  Life is good!

After bomb release it’s time to get the hell out of there using a low level egress again under the AAA and SAMS missiles to get back to D8.  Dirt pulls the stick full aft and, zoom, we are full-throttle going straight up.  The negative G’s are pushing me down hard in the seat.  I watch the negative G-meter needle swing past the number 5.  I can feel the blood draining from my head as we go up and up and up.  Dirt must be in excellent physical condition for his body to absorb these forces over and over.  During the climb my body weight goes from 150 to about 800.  I never blacked out, but I now understand the term, “grey out”!

At the top of the climb we level off, rendezvous with Cheeks, and get ready for the next bombing assignment.  Dirt let me fly the Alpha Jet when we were on top at D8 following Cheeks in big circles as we got the instructions for the next mission.  Then Dirt would take the controls back and we would be up-side-down in seconds plunging again toward the Earth.  On it went for about two hours like the best roller-coaster in the world and no limits to the action.  The day we were together, we had 9 targets destroyed, 5 with direct hits!!!!  Targets were tanks, trucks, buildings, Anti-aircraft positions, troops on the move near a road and a mobile radar site on the end of a runway.  We were pulling 4-5 G’s in the POP, 2-3 G’s in the maneuver, and up to 6 g’s during the low level egress (usually reversing course back to our anchor), where we saw 500KIAS at least twice during our flight—which is better than breaking the sound barrier when you are so low that you are giving crew-cuts to prairie dogs!

Dirt was euphoric with a majorly successful day.  On our way back to the Yuma airport, as I sat behind him in the Alpha Jet, my life literally in his capable hands, I marveled at his skill, technique, professionalism and all-consuming passion for at-the-edge flying.  I’m not sure you could ever find a more natural fighter pilot in the entire world.  Or one who enjoyed the experience more.

On landing I was physically drained and my clothing was soaked; I was totally spent but deliriously happy.  I slept during part of the ride back to Carlsbad (good thing Nan escorted me that day; I don’t think I could have driven home). 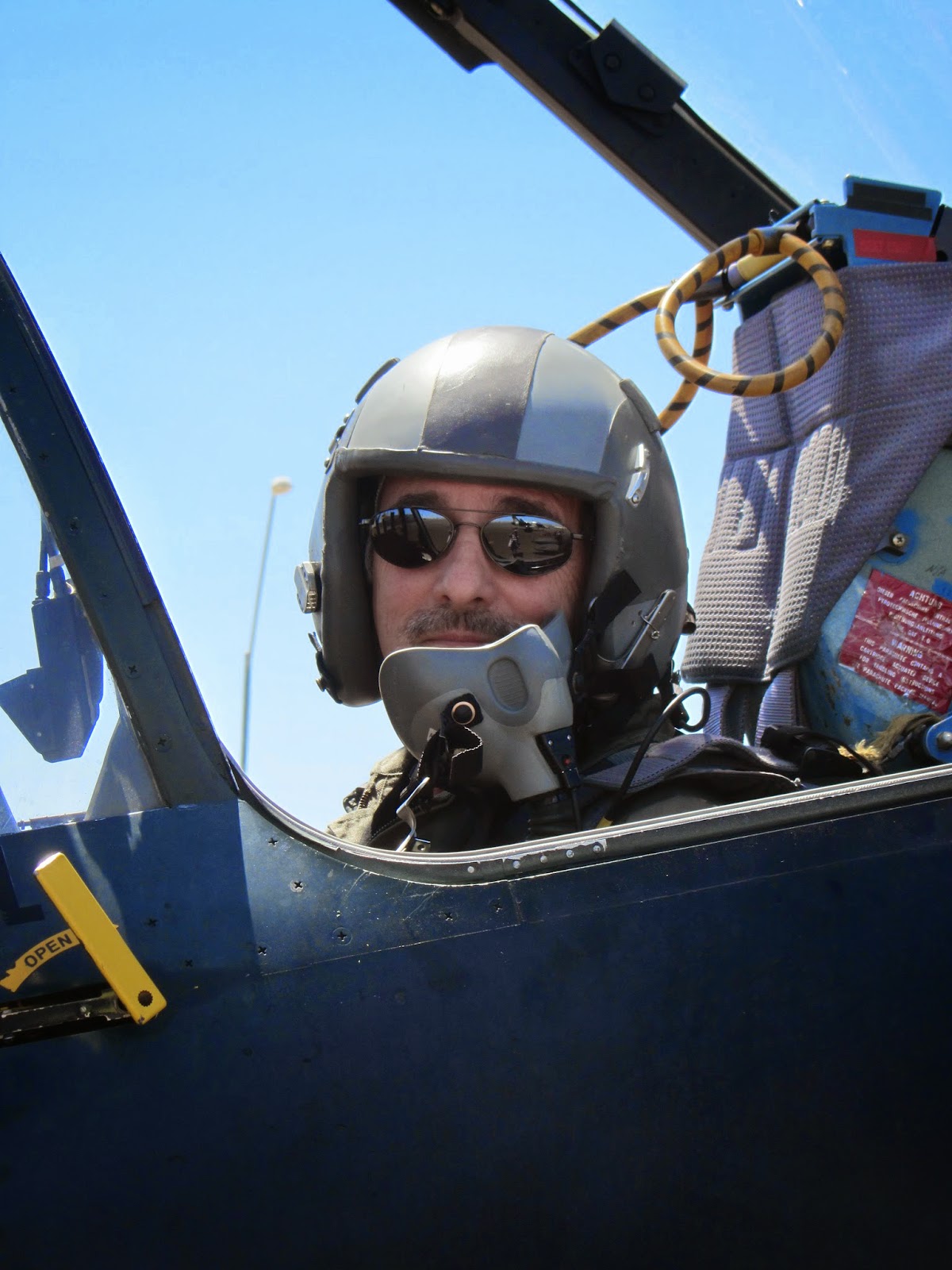 Nan and I talked about what an amazing and extraordinarily rare privilege it was to fly with Dirt.  Now when I see the F-18s streaking over the Scripps campus I can look up and smile because I know what an amazing experience it is to fly in a jet fighter!  Thanks, Don.  You are the greatest!
Posted by Cary at 8:59 PM