The 2019 IMSA Racing season has come to an end, and with it the racing career of the Corvette C7.R

What was the legacy of the 7th Generation Corvette as a race car?

Seven years ago I posted a synopsis of the racing success of Corvettes with the C6.R:

The C7.R replaced the prior version of the Corvette race car in 2014, and raced for six seasons.  Here is a season-by-season analysis (yes, I really do collect all these statistics!):


In its first year the C7.R competed in a field of 12 cars including 2 Vipers (who remembers the Viper?), 4 Porsches, 2 BMWs, 1 Ferrari and 1 Aston Martin.  Corvette won four races in a row in the middle of the season (Long Beach, Laguna Seca, Watkins Glen and Canadian Tire Motorsports Park).  After BoP changes, no more 1st place victories accrued to Corvette, but the #3 Corvette, driven by Jan Magnussen and Antonio Garcia, accumulated enough points to finish second place in between the two Vipers in 1st and 3rd.


Because of consistent performance throughout the season, Magnussen and Garcia placed 1st in the Driver Championship with 125 points.  They were followed by Dirk Meuller and Joey Hand (BMW) and 3rd place Driver points went to the other Corvette team of Oliver Gavin and Tommy Milner.

So the maiden year of the C7.R was pretty good for Corvette Racing.


In 2015 the field of competitors dropped to 10 with the absence of the Vipers.  The 2015 season started out great for the C7.R with first-place victories in the first two endurance races - Daytona (24 hours) and Sebring (12 hours). But neither Corvette finished better than 3rd place for the remainder of the season.  Porsche got "serious" in 2015 with two Porsche North America factory entries and ended the season with 1st place points, followed by BMW, and Corvette -- this year it was the #3 car's turn to shine.

The Corvette C7.R scored its first Le Mans win at the 2015 24 Hours of Le Mans, with Oliver Gavin, Tommy Milner, and Jordan Taylor driving the #64 Corvette to victory in the GTE-Pro class. It is also Corvette Racing's 8th win at the circuit. 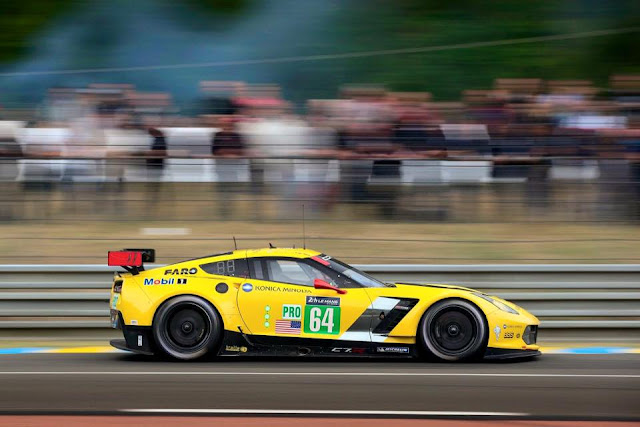 Corvette Racing won endurance racing's infamous "triple crown" with wins at the 24 hours of Daytona, 12 hours of Sebring, and the 24 hours of Le Mans all in the same year.  This feat is amazing!  You will recall that the "triple Crown" was a significant part of the plot in "Ford versus Ferrari" in which Ken Miles was denied this distinction by the bone-headed leadership at Ford! 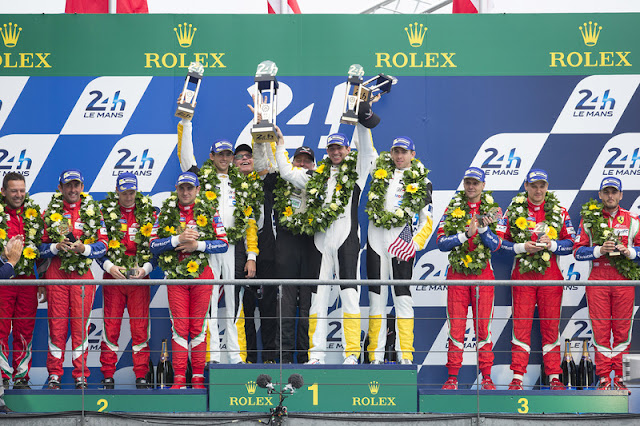 Despite winning the "Triple Crown" of endurance races, Corvette fans were a little disappointed in the second season of the C7.R.

Ahead of the season, the C7.R received an update, which included a new diffuser, to comply with the new for 2016 Group GTE regulations, aimed at increasing the performance of the class.


The 2016 field of competitors increased to 11 entries.  2016 was also the year that the Ford GT debuted in the GTLM class.


Perhaps the C7.R's ultimate 2016 performance occurred at the inaugural race of the year, the 2016 Rolex 24 Hours of Daytona.  The Corvette racing team scored a class win with a photo finish between the numbers 3 and 4 cars, driven by Oliver Gavin and Antonio Garcia. The cars finished .034 seconds apart from one another. 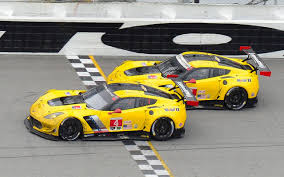 
In 2016, the Corvette C7.R scored its second 12 Hours of Sebring win with car #4 driven by Oliver Gavin, Tommy Milner and Marcel Fässler in the GTLM Class.  The #4 Corvette C7.R went on to win the WeatherTech Sportscar Championship in the GTLM class. They won the Drivers', Team, and Manufacturers' championship, as well as the North American Endurance cup.

The #3 Corvette finished with third-place points. 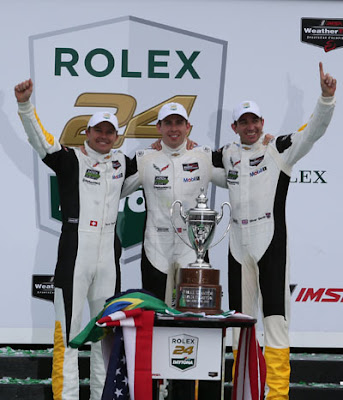 2016 was also the year that Nan, Don, Shirley and I attended the 24 Hours of Le Mans.  The C7.R didn't do well in France, but we had a blast with the National Corvette Museum group that went to Paris, Normandy, and Le Mans for the event. 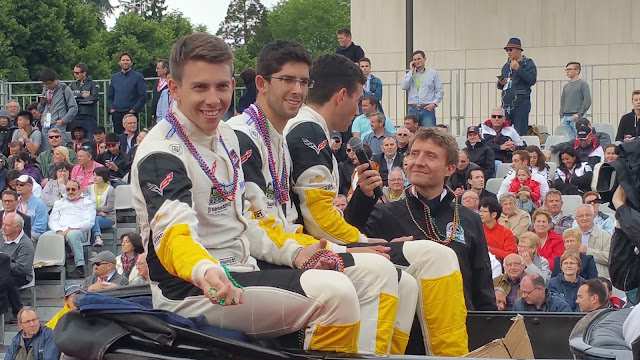 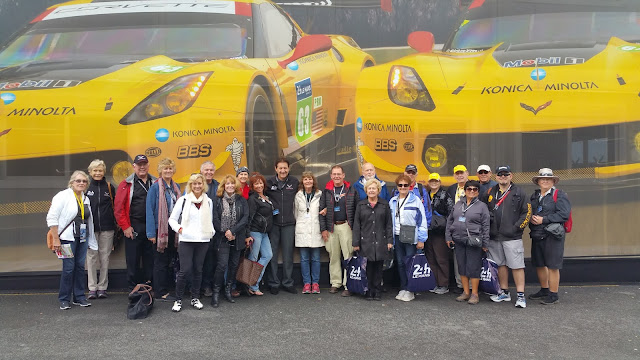 
The Ford GT population increased in 2017 with four entries, but two were only used for the endurance races.  The 2017 field remained at 11 entries and there were 11 races.


2017 was another wildly successful year for the C7.R, but this year it was the #3 team that earned the high honors.  The #3 Corvette won at Sebring (the second year in a row that Corvette placed first in GTLM), COTA, and VIR.  The #4 Corvette won at Long Beach.  By the time Nan, Don, Shirley and I attended the race at Laguna Seca, we were quite certain that the #3 Corvette would win the Team championship with a comfortable lead over the new BMW M6 and both Ford GT cars.

By season's end, once again, Corvette Racing won the Team, Driver, and Manufacturer titles -- a second sweep in a row. 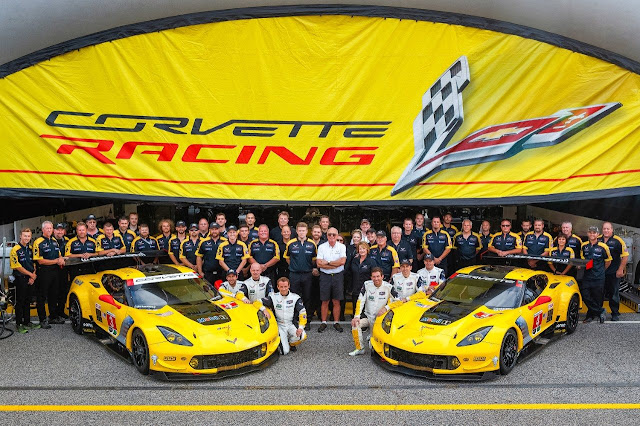 
After wining the Team championship in the GTLM class two seasons in a row, would it be possible for the C7.R to "three-peat" in 2018? It turned out that the 2018 GTLM scoring was tighter than it had been for the previous four years -- a margin of victory of only 6 points!

The #3 Corvette, without winning a single race, accumulated enough points to edge out the #67 Ford GT for the team championship -- a "three peat"!  Antonio Garcia and Jan Magnussen secured 8 podium finishes out of the 11 race season -- a consistency that had become a hallmark of Corvette Racing.

Read about the exciting final race -- and the thrilling finish and team work in which the #4 Corvette held off the #67 Ford to seal the championship for their sister car! 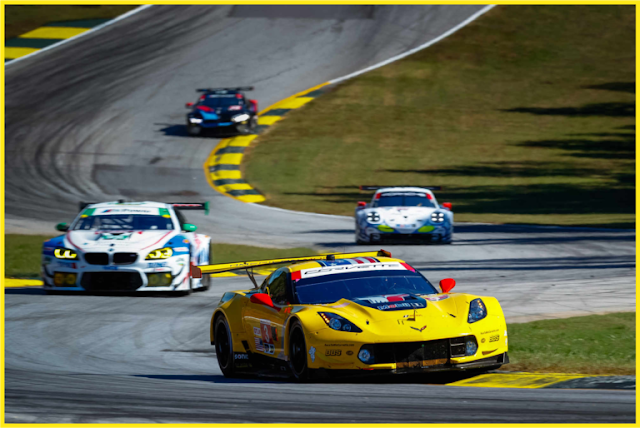 
No one at Chevrolet would admit it, but everyone in the World knew that 2019 would be the final season for the C7.R -- too many spy photos of the mid-engine C8 Corvette had been taken to leave anyone in doubt that a all-new Corvette was coming in 2020.


Despite racing with the oldest platform in the GTLM Class of IMSA, Corvette racing pursued the 2019 season with dedication and determination.  Porsche had the season from the very beginning, winning 6 times and placing 2nd twice.  Of the 11 races, the #3 Corvette team finished 2nd place three times and third place three times, accumulating enough points to tie the #911 Porsche for 2nd place on the season.

2019 would also be the final season for the Ford GT. 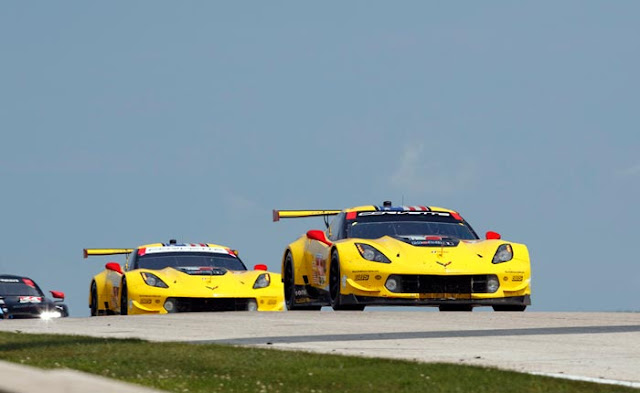 
Summarizing the results above, we see that in six years, a Corvette was the season champion three times, finished (or tied for) second-place twice, and finished third-place three times.

If we use the "Podium" points to tally scores for the top three winners each season (35 points for first, 32 points for second, and 30 for third), Corvette accumulated more points than any other manufacturer over the six-year period -- clear dominance.  And no team had a three-peat of 1st place team finishes as Corvette did in 2016, 2017, and 2018. 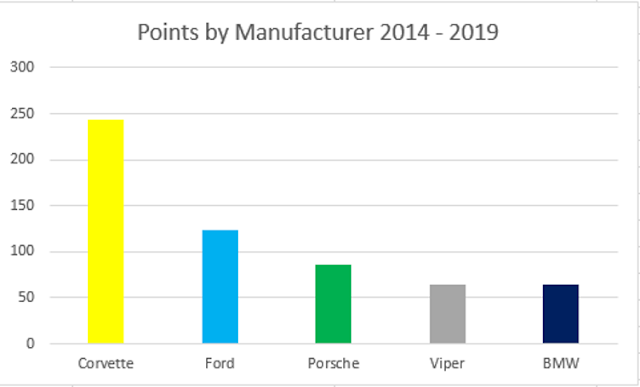 To make a fair comparison to the Ford GT, which only raced the final four years, the results are shown below.  Still a clear dominance by the C7.R. The much heralded Ford GT never won a team championship in their four years of IMSA competition. 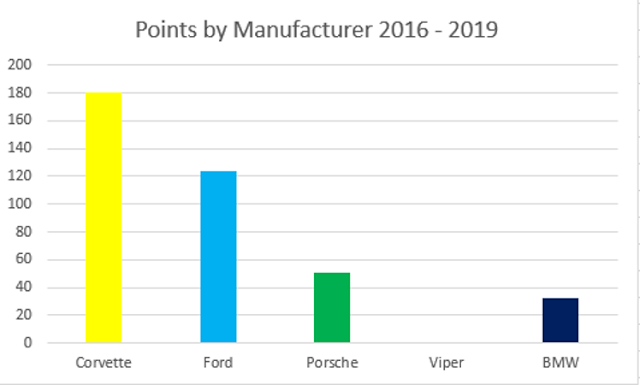 Our memories tend to be short, and most IMSA fans are probably only remembering last year's results.  I hope this analysis sets the record clearly before us -- the C7.R completely dominated the IMSA series during its six-year run.


As Doug Fehan remarked a few years ago about why manufacturers and teams compete in GTLM, "They come here to try to beat us -- we are the standard."


In my view, the C7.R was enormously successful, and I'm euphoric that I was able to buy a Z06 Corvette that is so reminiscent of the C7.R! 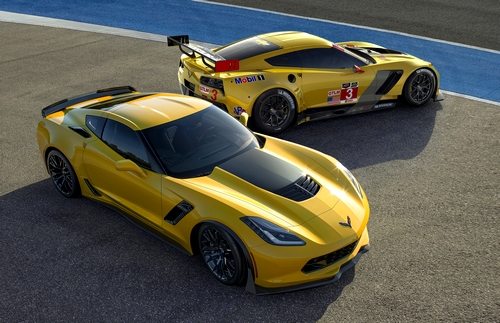