I have always said that the C7 Corvettes are “race cars with license tags”.  Realizing this fact, Chevrolet is now offering new Corvette buyers a discounted price to attend the Ron Fellows Performance Driving School in Pahrump, Nevada.  Ron Fellows, legendary Corvette Racing driver, secured the exclusive opportunity to train new owners to use all the capabilities of their new cars without endangering the car (or the human) body. 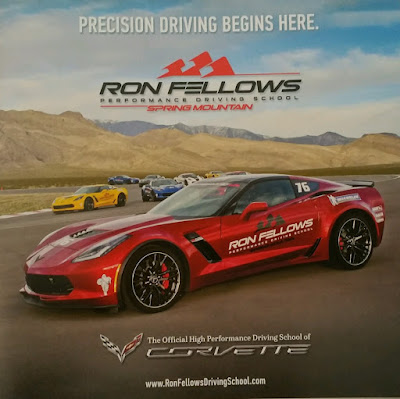 Soon after Don purchased his new C7 he decided to take advantage of the driving school offer and asked me and Bill to tag along.  Since Don had been to the Pahrump track twice before, they allowed him to participate in the Level 2 class.  Bill and I were assigned to Level 1.  Nancy and Shirley joined us for two full days of shredding tires, smoking clutch disks, and melting brake pads. 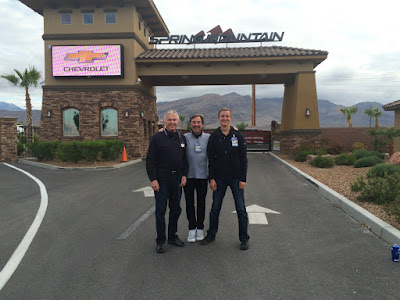 Level 1 covers the systems of the car,  hard braking and evasive maneuvers, skid pad technique, basic racing skills, and driving on the track as fast as you dare (given the $8,000 deductible incentive to not get too crazy) in a lead-follow configuration.  Level 2 is more advanced and includes unaccompanied racing, passing, and even more track time.  I think Level 3 teaches you how to crash into your opponent so your team can steal a first-place finish (and I’m sure the Porsche and Ferrari drivers have taken this course!).

How to Steal A First Place Finish

In both Level 1 and 2 your spouse gets track time too, riding along with the (young, handsome) instructors.  Shirley and Nancy took full advantage of this benefit. 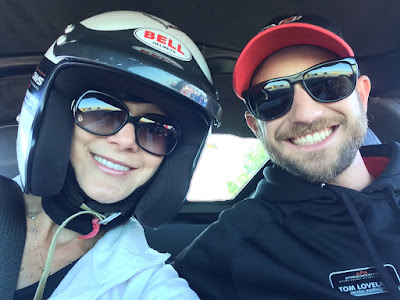 On Monday morning Don joined nine other experienced drivers in the Level 2 class.  Before long we could hear them roaring around the North/South track, one of three courses at Pahrump.  The small class size and full-out effort showed on Don’s exhausted (but grinning) face when we all met for lunch later in the day on Monday.

Over in the Level 1 class Bill and I were the only drivers who were not new C7 owners.  Each driver was assigned to a car as close to their car back home.  The options were the Z51 package (with “only” 460 HP) or the Z06 (with 650 HP) and either the 7 speed stick or the 8 speed paddle shifter.  Bill and I were each assigned Z51 stick cars.  We were happy.  There were more than 100 Corvettes at the track and all of them were ordered with the heavy-duty brakes, special handling upgrades and the “rev-matching” feature (more on this below).  The only modifications made to the cars were to put a radio communications system in them (so the instructors could “coach” [yell at] the drivers) and to fit them with Michelin racing tires.  We discovered that these completely stock Corvettes could take all the punishment we could dish out over the next two days.

Bill was clearly the best driver in Level 1.  He owns a 2009 Twin Turbo Porsche 997.1 and has owned the Audi R8 so he is familiar with really fast cars that can turn corners (unlike your drag-race author).  All the high-end manufacturers try to lure Bill with “driving experience” events and he has driven the best and fastest cars from Germany and Italy.  I am hoping he will get the “Corvette Bug”! 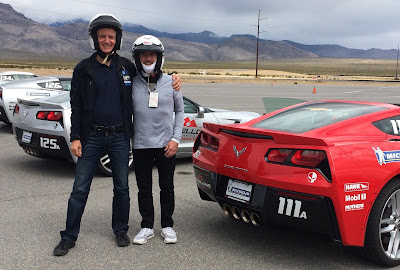 On day one Bill and I were separated for the initial “familiarization” sessions, but when it came time to get on the track we were assigned to the same group, a trio of drivers (us and a stranger) to follow one of the instructors.  Actually being on the track, essentially turned loose with an experienced driver in the lead, was awesome.  The challenge was to hit the apex of each corner of the 10 turn course.  Each turn was different and required a modified approach, creating a balance between front and rear tires, and a smooth exit.  Turn 3 was my biggest issue, but most people had issues with turn 10.  We improved with each lap, taking turns being in position two behind the instructor who was giving Nan a “ride along”. 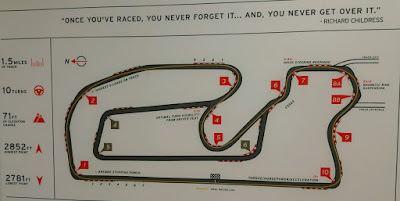 One skill that has been taught for many years became unnecessary for our courses.  Driving schools try to teach the mastery of “heel-toe” footwork in which the driver uses the right foot to press the brakes while entering a turn but uses the same foot to rev the engine while down-shifting.  In the C7 Corvette this maneuver is unnecessary since the computer-controlled engine and transmission figure out that you are down-shifting and the engine is raced to make the gears in the transmission match the higher speed of the lower gear (“rev-matching”).  This capability is computer magic that only a chip-designer (like Bill) can understand!

Over in Level 2 Don was getting his money’s worth as Shirley watched from the passenger seat of her instructor’s car.  By the end of the day we were all ready for some good food and wine.  Off we ventured to the near-by Pahrump Valley Winery.

The owner entertained us at the complimentary wine tasting room, followed by a great meal.  Then it was home to bed to rest up for day two.  We didn’t know that the best was yet to come!

Day 2 was pretty much all track time for all of us.  In Level 1 the morning program included having an instructor drive while the student watched from the passenger seat.  My instructor drove like a man gone mad; for the first time the smell of brake linings filled the cockpit.  I learned that I was down-shifting too soon and not being aggressive enough on the brakes going into the corners.  With these new-found techniques, over the course of the day, I got better and better with fewer “suggestions” coming through the radio by the instructor (such as, “Cary, you missed the apex on turn 5 that time”, or “Let’s use the brakes to balance the car”).

Near the end of day two (they call it “Graduation” and apparently I passed the course) we enjoyed a surprise visit by Ron Fellows!  He first came to Level 1, answered a few questions, and signed autographs.  Then he visited with the level 2 group.  Don and Shirley had met Ron previously and have seen him at Corvette race events, so it was a nice time to reconnect with a racing legend. 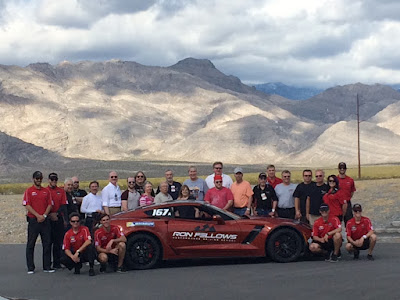 Shirley did!  Ron offered Shirley an exclusive experience – to ride along as he drove one of the Z06 Corvettes around the North/South track.  Shirley held on for dear life as Ron ripped around the course faster than any of the Level 2 folks, entering corners at speeds impossible to imagine.  Her happiness endured the entire trip back to San Diego and beyond! 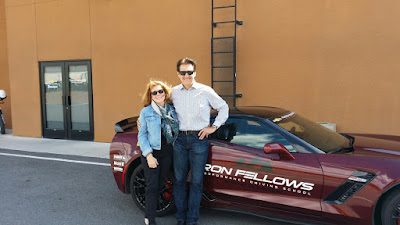 So, what will our next adventure be?  Don, Shirley, Nan and I are going to France in June to watch the Corvettes race at the 24 Hours of Le Mans.  I figure that if any of the six Corvette drivers should come down with the flu, then Don (or Bill,if he catches a private jet to Paris)  can step in and drive for them!  Perfect timing!